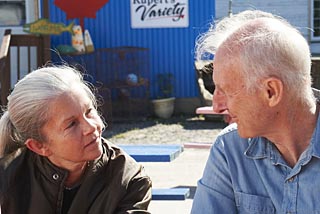 The newest addition to my Movies You Might Not Know list is “Still Mine.” It stars James Cromwell and Genevieve Bujold as Craig and Irene Morrison, a couple in their 80s who have been married for six decades.

He’s doing fine, but she’s in the early stages of Alzheimer’s. Though Irene’s forgetfulness frustrates Craig, he loves her deeply, and when she falls down the stairs of their big old farmhouse, he decides they need a smaller place. Unable to afford someone to build a new, smaller home nearby on his 2,000 acre property, Craig undertakes the project himself. He quickly runs afoul of the local building commission’s bureaucracy because he doesn’t have a permit, doesn’t have blueprints, doesn’t have the right approval stamps on the wood he’s cut down from the old-growth pines on his own property. His neighbor and his children urge him to stop, and the bureaucrats take legal action against him, but Craig is on a mission to provide a new, safe, living environment for Irene, allowing her to live out her days with him rather than going into a facility.

The story, written and directed by Michael McGowan, works because Cromwell is perfect for the role. He’s not playing the kindly old farmer from “Babe” anymore. He plays Craig as a stubborn man who is fighting two enemies — the disease that is draining his wife away and the by-the-law inspector who is determined not to allow the new structure to be completed. Meanwhile, Bujold more than holds her own as Irene, never overplaying the dementia that’s affecting her, yet still lovely in the way she shows her ongoing affection for Craig as her partner in life.