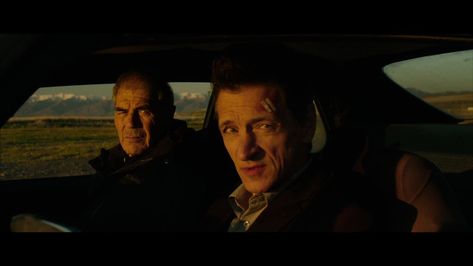 I first noticed John Hawkes opposite Jennifer Lawrence in 2010’s “Winter’s Bone,” in which he matched her intensity scene-for-scene. He also played Frances McDormand’s ex-husband last year in “Three Billboards Outside Ebbing, Missouri.” In between, Hawkes has had several other supporting roles, but wasn’t cast as a leading man until “Small Town Crime,” which opened earlier this year in some cities and is now on DVD.

Hawkes plays Mike Kendall, an alcoholic ex-cop who wants to get back on the force, but that’s unlikely since he’s usually drunk. He spends most of his time throwing back beers with his brother-in-law, Anthony Anderson, and sleeping it off in his car wherever he stopped last. One morning, he wakes up in the car in the middle of a field, and as he drives back into town, he notices a woman’s body by the side of the road. She’s bloody and beaten, but still alive, so he takes her to the hospital. The mystery of what happened to her triggers his policeman’s curiosity, and pretty soon he’s pretending to be a private eye looking into the matter.

Along the way, Mike crosses paths with the woman’s grandfather, played by the always-solid Robert Forster and pimp named Mood (Clifton Collins Jr.), not to mention the real cops who are investigating the case and don’t want him in the way. There are also two hit men, a bar owner who runs a brothel, and other unsavory characters. In the midst of all of them, you can’t take your eyes off Hawkes. With his wiry, craggy appearance, looking and acting a bit like 1980s-era Harvey Keitel, he owns every shot and makes you care about Mike and his mission.

Octavia Spencer is cast yet again in a supporting role as Anderson’s wife and Hawkes’ adopted sister, a part that requires her to do nothing more than scold Hawkes in a few scenes. She’s listed as an executive producer of the movie, a credit she may have gotten instead of more to do on screen, but it’s a shame that — aside from “Hidden Figures” — Spencer can’t find better roles to play. She’s a very good actress who deserves better treatment from moviemakers.

“Small Town Crime,” written and directed by brothers Eshom and Ian Nelms, wraps good performances around an interesting story — but there’s something missing, and I can’t put my finger on it. I enjoyed the movie, and have added it to my Movies You Might Not Know list, but I didn’t love it, so I’m giving “Small Town Crime” a 7 on a scale of 10.