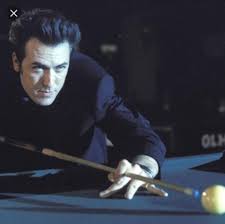 I was watching the World Series of Poker on ESPN last night, and one of the players they kept focusing on was Mars Callahan.  Lon McEachern kept referring to him as a Hollywood writer/director, so I went to IMdB to look him up.  Callahan’s last movie was “What Love Is,” starring Gina Gershon, Cuba Gooding Jr., and Anne Heche — it was released in 2007 on only 42 screens and then disappeared into the ether.

Before that, Callahan wrote, directed, and starred in a 2002 movie called “Pool Hall Junkies.”  I’d never heard of it, but since the movie was available for streaming on Netflix, I gave it a shot. The first thing that surprised me was the cast:  Callahan plays the pool hustler protagonist, Chazz Palminteri plays his backer who becomes his enemy, Rod Steiger runs the big pool hall in town, Christopher Walken is a rich guy who befriends Callahan, and Rick Schroeder is another young pro who’s great with a cue stick.

The scenes shot at the pool tables are terrific.  It looks like the actors are wielding their own cues — making some amazing shots and runs — and Callahan does at least as good a job at putting the game on film as Scorcese did in “The Color of Money.”  He also borrows a little of Quentin Tarantino’s style with freeze frames and slow motion, but it doesn’t get in the way.  Unfortunately, the non-pool-related dialogue is often trite, and the plot devices that get us to the climactic game offer little suspense.

But I’d still recommend “Pool Hall Junkies” for the action sequences alone, and have added it to my Movies You Might Not Know list. When it was over, I was left wondering why Callahan hasn’t done more.