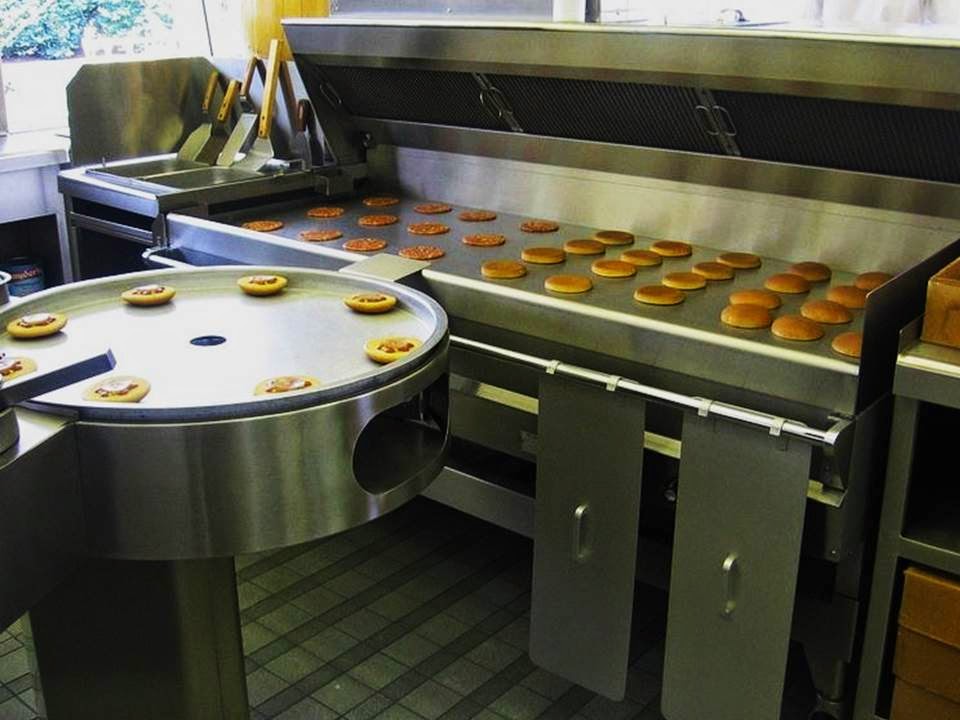 In reviewing “The Founder” earlier this week, I mentioned that I worked at McDonald’s as a teenager.

It was a summer job between my freshman and sophomore years of college. I was hired to work the grill. That meant turning frozen meat patties into edible hamburgers by the dozens, and when they gave me more hours, I added the breakfast shift and cooked eggs and pancakes, too.

The staff, almost entirely made up of teenagers, was split among gender lines. Women worked the registers, taking and fulfilling orders, while the men cooked and prepared everything — burgers, fries, drinks, and those godawful apple pies that went into the same vat of hot oil as the Filet-O-Fish. Those are not two tastes you want intermingling (who wants a dessert that tastes like seafood?). Disgusting.

In “The Founder,” there’s an extended sequence about using a powdered mix instead of ice cream to make the shakes — Ray Kroc and his franchisees loved the idea because it cut down on their refrigeration costs, but the McDonald brothers were horrified at the thought of not having an actual dairy product in their milkshakes. Of course, Kroc won both the battle and the war, so when I worked there, the menu board said “shakes,” not “milkshakes.” The customers didn’t complain, but by then, they hadn’t tasted an ice-cream-laden shake from McDonald’s in years, so either they didn’t know the difference or they didn’t care.

I started the job in late May, and planned to go back to college right after Labor Day, but I didn’t last that long because of an incident in July.

I was working the grill, cooking up quarter-pounders and burgers. The prep station was behind me. That’s where another employee got the buns ready. Unlike the rest of the country, consumers on Long Island detested the taste of mustard on their hamburgers (similarly, we would never put ketchup on a hot dog!), so there were only three condiments involved — ketchup, pickles, and (rehydrated) onions.

When the burgers were ready, I’d scoop each one up with a spatula, spin and place it on the prepared bun, then spin back and repeat, over and over again. When all of the burgers were off the grill, I’d reach into a box, pull out more frozen patties, and start from the top.

The burgers said they were 100% beef, but 20% of that was fat, which created a lot of drippings, and because I was moving the burgers from the grill over an open area and then onto the bun-prep table behind me, some of that hot, liquified fat dripped onto the floor. During downtimes (between the breakfast and lunch rushes), we were supposed to clean — scrape the excess grease off the grill, mop up the inevitable mess on the floor, etc. — but when we were really busy (e.g. noon-1pm), there was no time to clean anything.

And that explains what happened on that day in July.

I was making the turn back to the grill when my foot slipped on the greasy floor and went out from under me. Instinctively, I put my hand out to break my fall.  Unfortunately, the nice, flat surface under my hand was the 425-degree grill. Even though my flesh only touched the grill for a second, it hurt like hell, so I fell to my knees and blurted, “Jesus Christ!”

The manager, who was on the other side of the metal counter in front of the grill, heard both my scream of pain and the gasps of the other employees. He quickly came around to where I was now kneeling and grimacing, helped me up, led me to the back of the store, took one look at my hand and shoved it into the ice machine. That felt a little better, but not much.

After telling me to keep my hand in there, he instructed someone else to work the grill while everyone else returned to their stations and business resumed. The manager barked out instructions to them as he wrapped my hand in gauze from the first aid kit and told them he was going to take me to the hospital.

When we got to the emergency room, the manager explained to a nurse what had happened and she quickly got me to an examination room, where she unwrapped the gauze and we all got a good look at the damage to my hand. I almost threw up. A doctor appeared and assessed that I’d burned off most of the layers of skin on my right palm, but they would grow back. Meanwhile, he had the nurse apply some topical ointment (note: anytime that word comes up in your life, something has gone horribly wrong — there’s never a happy time for ointment) and wrap my hand in some new gauze.

I asked how long the pain would last. The doctor explained that I’d be in a lot of discomfort for a couple of weeks. He wrote me a prescription for something that would offer relief, as well as more ointment I was to put on my hand when I changed the dressing every couple of days. Meanwhile, I should try not to use the hand very much. After all, what would a teenage boy need his right hand for?

When I came out of the exam room, the manager was gone — he’d returned to the restaurant — but the franchise owner and his wife were there. They showed the appropriate amount of sympathy and told me not to worry about the hospital bill because they would take care of it — and they did. Today, I’d assume they were afraid of a lawsuit, and maybe they were then, but it never crossed my mind.

Now the ironic portion of the story.

When that day started, I had planned to tell the manager at the end of my shift that I had to take some time off to join my parents at the Summer Olympics in Montreal. They’d left a week earlier to drive around in my father’s car and do some sightseeing elsewhere in Canada before meeting me there. I was going to tell him I’d be gone for the last week of July, but would be back to work through August.

However, after the injury, there was no way I was returning to the job. I didn’t say anything about it to the owner then, but the next day called to say I wasn’t coming back. No one made a fuss, but wished me well and hoped my hand felt better soon. I never heard from any of them again.

Twenty-four hours later, I got into my mother’s car (a Plymouth Barracuda!) and began the 400-mile, solo trip north. It wasn’t easy, because it had a three-speed manual transmission and I couldn’t handle the stick shift very well with my injured paw, but I got there and received love and compassion from my parents as we went around to several Olympic events over the course of the next week — with my father doing all the driving.

The good news is that I was able to unwrap my hand for good by the end of August, and within a couple of years, it had healed so well that you would not have been able to tell which of them had been burned. I was left with no scars, just the memory of that awful day.

That incident, combined with the experience of being around McDonald’s food every day for a couple of months, kept me away from the Golden Arches for a very, very long time. And even when I did return, I never ordered an apple pie or a non-milkshake.