My Dinner With Gallagher, Part 2 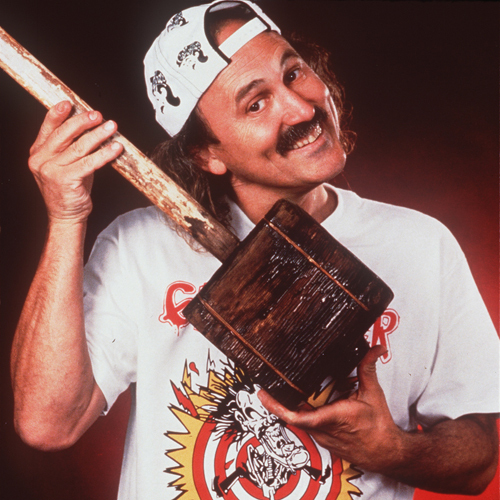 When I got to Los Angeles in January, 1981, I did call Gallagher, who remembered me, said he was doing an appearance that afternoon, and asked if I wanted to come along. I said sure, so he gave me directions to his house, where I would ride along to the gig.

As I arrived at his home, the door was opened by Robin, a beautiful redhead with bright green eyes, who introduced herself as his girlfriend. She invited me inside for a beer while he got dressed. They hadn’t lived in the house very long, so there wasn’t much furniture, but the walls of the front room were covered with large pieces of paper on which Gallagher had written down all sorts of jokes, ideas, prop drawings, etc. I can’t remember any of them, but it was clear that this was the space where he poured out his brains whenever he thought of something that might become a bit for his act. Comedians in the 21st century use laptop computers as their scratch pads, but they hadn’t been invented 30 years ago, so he had turned his room into his idea gallery.

After 15 minutes or so, Gallagher appeared, greeted me, made sure he had his prop boxes ready to go, and led Robin and me outside to a stretch limo – my first time riding in such luxury, though for some reason I hadn’t thought to ask where we were going. During the ride, I asked if he planned to do more specials for Showtime, and he replied that he’d just signed a new deal for several more, which would include some of the things I’d seen on his wall. But that day, he wasn’t going to do any new material, because he’d only been contracted for a tight ten minutes for a TV special about the national high school cheerleading championships that was being taped at Magic Mountain.

When we got there, it was drizzling, so a TV production assistant led us to a trailer that would serve as Gallagher’s dressing room, although he’d have to share it with the other act performing on the show. He seemed a little bit upset that they hadn’t given him his own trailer until we got inside and met his trailer-mate — Charlie Callas. Both Gallagher and I were fans of Callas, and when the older comedian told the younger one he liked his act, the two became quick friends. I found a place to sit and listened to them tell stories for a half-hour or so before the production assistant popped her head in the door to say the rain had stopped, so they were ready for Gallagher’s rehearsal. He and Robin left, and I was left along with Callas.

I was thrilled. Having seen him on innumerable Carson shows through the years, his facial contortions and verbal sound effects had always made me laugh. He was completely comfortable sitting in the trailer talking with me, picking up drumsticks to tap out a rhythm on the tabletop that he’d learned by watching Buddy Rich when he’d opened for him in Las Vegas. When I mentioned that I worked at a rock radio station, he admitted not knowing much about current groups, but wanted to hear about the life of a DJ. I explained that I’d only been in the business a couple of years, so I didn’t have many stories, but shared a few. He seemed as interested in those as I was in his backstage stories of Sin City and network TV. He couldn’t have been nicer, and was probably relieved to have someone help him kill time until they needed him onstage.

I’ll share the finale of this story with you tomorrow.