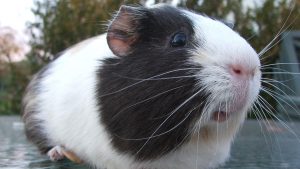 In my list yesterday of Ten Things I’ve Never Done, I almost included “had a pet,” because I grew up with no cat, dog, bird, snake, turtle, or any other non-human creature in our apartment or, later, house.

Don’t say “awww.” My childhood progressed just fine without a domesticated animal sharing our living space. I don’t even remember it coming up as a topic of conversation. Neither my brother nor I ever threw a fit because our parents wouldn’t let us have one, and I was never jealous of anyone who did. In fact, if I visited friends who had dogs, I always hated it when they’d bark, run up and put their paws on me, or commit other acts I was assured were friendly, but never appealed to me in any way. I remember also developing a fear of dogs because a couple of aggressive pooches liked to chase after me when I rode my bicycle to our elementary school.

So that’s why “had a pet” almost made it onto the Things I’ve Never Done list.

But then I remembered that, when my daughter was young, we got her a guinea pig. Which turned into a series of guinea pigs, because they all eventually ended up buried in our backyard. No, not while alive — what kind of animal-hating monster do you think I am? After a non-denominational funeral service, there would be crying, followed by a trip back to the pet store to buy a replacement. We probably went through this four times before the charm wore off.

So, because they lived under the same roof, I suppose technically I did have pets. They lived in a cage in my daughter’s room, except when she took them out to our lawn so they could graze in the grass. That roaring bit of fun sometimes lasted as long as ten minutes before they were scooped up and returned to the cage.

My daughter wasn’t solely responsible for guinea pig care, of course. My wife played a major part, including clipping the animals’ nails, which seemed to grow at an exceedingly rapid pace and more often than not left scratches gouged into Martha’s skin. You’ll be shocked to hear that at no point did I ever once volunteer to take over.

During those years, I could barely stand to walk into my daughter’s bedroom because of the smell. I’m no expert, but it is my belief that guinea pig urine consists of 100% ammonia. I couldn’t make it past the threshold of her room before the odor hit me — wham! — and literally knocked me backwards a few times. I have no idea how she was able to spend five minutes in there, let alone sleep through the night, without the benefit of a hazmat suit.

Now, don’t get me wrong. I know plenty of people — including family members — who loved having pets as part of their lives. And I don’t mean to deter you from doing the same. But don’t pity me because I’ve chosen to go through life without having to constantly pick animal hair and fur off my clothes and furniture or inhale the noxious odors emitted by your little darlings.