Museums Of Movies And Cars

For the first time since before the pandemic began, I spent the weekend in Los Angeles — playing poker, hanging out with friends, and visiting two museums on my must-see list. 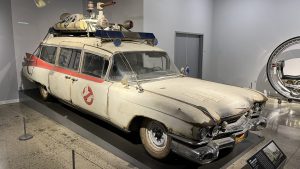 One was the Petersen Automotive Museum.

I know absolutely nothing about cars, but it was interesting to see models from the early 1900s right up to today, including some that were unique, odd, or both. There were some we’ve all seen on screen, including the Batmobile from Tim Burton’s movies, the original “Ghostbusters” vehicle (not in good shape!), and the DeLorean used in all three installments of “Back To The Future.” There was also a separate exhibit of vehicles from James Bond movies, from the Aston Martin DB5 to a motorcycle to a helicopter to several which had been used underwater. Pretty cool.

The Petersen also offers an extra tour of The Vault, a basement garage full of 250 cars. Unfortunately, our guide merely pointed here and there, told us dry facts like the makes and models of the vehicles, how big their engines are, and how much horsepower they have. I could have gotten such info from placards, but I wanted stories, and he offered very few, so I bailed halfway through. 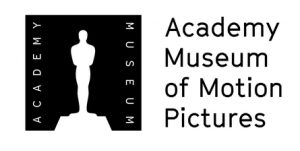 I had a much better experience earlier that day a block away at the new Academy Museum of Motion Pictures. Beautifully designed, its exhibits — spread over four floors — are full of more than just clips.

Among my favorites was “Backdrops: An Invisible Art,” which showcases the work done by painters (both with a brush and with digital tools) who create background scenery that provides perspective, depth, and simple scene-setting. Photos of those artists on the job show the remarkable work they’ve done — so good viewers aren’t even aware it’s a painting. One wall of that room is covered by the backdrop of Mount Rushmore used in Alfred Hitchcock’s masterpiece, “North By Northwest.” It’s so tall, the museum had to install a balcony on the floor above for visitors to take it all in. 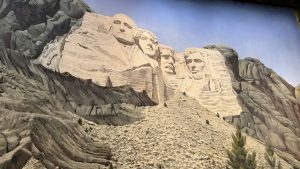 Another great exhibit explains the layers of sound that make up a single scene. For the example, we were shown the opening sequence of “Raiders Of The Lost Ark,” with Indiana Jones (Harrison Ford) taking a golden idol off a pedestal deep inside a cave, setting off a sequence of events that nearly kills him, including the iconic giant rolling ball of stone. It’s still thrilling to watch, but it took lots of sound engineers to make it work.

The presentation began with raw audio recorded on the set the day they filmed — a big nothing burger. That was stripped away, replaced by sound effects, foley work, Automated Dialogue Replacement, a music score, and more. The elements were shown to us one at a time until we saw the final version, a well-executed display of the layers of post-production enhancement that made the sequence work, and proof that movies need more than just exciting visuals.

The museum also has exhibits about Spike Lee’s career, “The Wizard of Oz,” and the contributions Thelma Schoonmaker has made as a groundbreaking film editor and trusted adviser to Martin Scorsese for over 40 years. There’s an entire room dedicated to the history of The Oscars, with clips from moving acceptance speeches made over 75 years of ceremonies — not just by well-known actors and directors, but craftspeople, hair designers, makeup artists, and documentarians, too.

It was clear that some of my fellow museum-goers love movies as much as I do, though there were some who rushed through, only looking for something they already knew. There was one family of four I crossed paths with several times and noticed that the parents weren’t imparting any information or enthusiasm to their young kids, who looked restless and bored. I wondered why they’d even gone there in the first place.

That’s a shame, because there’s so much to glean in that building. I spent more than three hours there, often seeing details I already knew, but absorbing quite a bit that was new to me.

You don’t have to be a movie aficionado to get a real kick out of the Academy Museum. It it were a film, I’d give it a 9 out of 10.