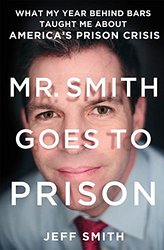 Former Missouri state senator Jeff Smith spent 10 months in federal prison in Kentucky for lying to the FBI about a campaign finance law violation in 2004 when he ran for Congress. Now a professor at The New School, Jeff returned to my show to talk about the book about his experiences, “Mr. Smith Goes To Prison.” Among the questions I asked him:

Along the way, Jeff told stories about why he smuggled food out of the prison warehouse, what happened when one prisoner took a special liking to him, and how the words Shawshank and Shark Tank are connected inside. Listen, then click here to subscribe to these podcasts via iTunes!