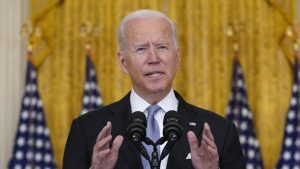 After the Taliban moved in swiftly to fill the leadership abyss in Afghanistan, the punditry class was rife with claims this would haunt Joe Biden politically all the way through the 2024 election. Are you kidding me? Other than the professional loudmouths on talk radio and cable news, no Americans care — they didn’t even know we still had a presence in Afghanistan — so no opponent will be able to make it a big deal a year from now, let alone three.

A story on the front page of Tuesday’s NY Times business section said the National Highway Traffic Safety Administration has opened an investigation into Tesla’s autopilot, prompted by 11 accidents involving the feature. But in every case cited, it was humans who caused the crash. One guy dropped his phone on the floor and went looking for it. Another climbed into the back seat while the car was in motion. Others were drunk or distracted or asleep at the wheel. In other words, these people would have been hazards on the road regardless. Wouldn’t the same accidents have occurred if, instead of autopilot, the cars were operating with the cruise control on?

After failing multiple times as a quarterback in pro football, then trying to reinvent himself as a tight end, Tim Tebow has been cut by the Jacksonville Jaguars. He immediately announced he’s begun to work on a floor exercise routine in the hopes of replacing Simone Biles at the next Olympics.

Funniest thing I’ve read this week: The Taliban said it would honor women’s rights and an independent media within the “frameworks” of Islamic law. In a related story, Amish leaders say they love to stay home, watch Netflix, and chill.