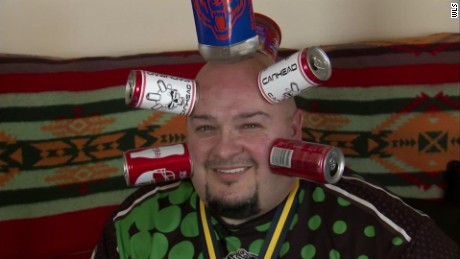 I once again step into the role of my alter ego, Mr. Perspective, to examine a story about a guy in suburban Chicago who calls himself “Canhead” because he can stick cans and other objects to his bald, shaved head. He claims it’s because of a mysterious medical condition — he says one doctor told him it could be due to his abnormally high body temperature, around 100 degrees.

I think he’s using suction, pressing the cans against his skin until the small amount of air in the indentation on the bottom is pushed out, causing external air pressure to hold the can in place. Of course, no TV reporter (or Ellen DeGeneres, who gave him a non-skeptical platform on her show) thought to ask why he’s never sticking to the side of the can.


After I mentioned this on the air, listener Jeff Olsen emailed that Canhead was debunked on the Discovery show, “Outrageous Acts Of Science.”