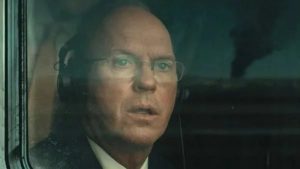 As “Worth” begins, attorney Kenneth Feinberg (Michael Keaton) stands before a class of students at Georgetown and asks them to assess the value of a human life, and how much a dead person’s family should be compensated for his murder. It’s a fascinating discussion, with a theme that goes right to the heart of the movie.

In real life, Feinberg was the lawyer charged with figuring out how to compensate the thousands of victims of the 9/11 attacks. “Worth” is about that process and the efforts of several different parties to fix the formula Feinberg settled on for those calculations.

The movie tries to play up the suspense of whether Feinberg and his colleagues would be able to convince enough of the next of kin to accept distributions from a congressionally-mandated fund, rather than suing the airlines on their own. Because we know his efforts were successful, there’s not much drama there.

Fortunately, Max Borenstein’s script (like Feinberg) works much better when it focuses on the individuals whose lives were torn apart by the terrorist attacks of that horrible day. The scenes in which they share the personal stories of their loss are heartbreaking and sympathetically portrayed. In particular, there’s the matter of a gay man whose partner was among the victims, but because they weren’t married, might receive nothing from the settlement. Instead, the check would go to the dead man’s homophobic parents, who refused to accept that their son was gay and sharing his life with another man.

Keaton — long one of our most versatile actors — is stunningly good as Feinberg, as is Laura Benanti as the conflicted wife of a New York firefighter who died in the Twin Towers. There’s also nice supporting work from Amy Ryan as Feinberg’s partner in their law practice, Stanley Tucci as a victim’s husband who thinks Feinberg’s doing it all wrong, and Tate Donovan as a lawyer representing high-net-worth clients whose lives he thinks were worth more than even the first responders who died.