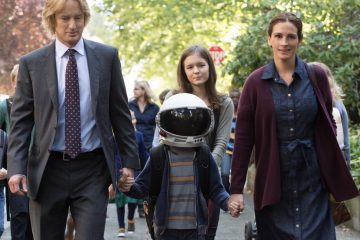 In “Wonder,” Jacob Tremblay (so good with Brie Larson in “Room”) is Auggie, a boy born with facial deformities. He has been homeschooled by his mother, Julia Roberts, but now she and dad Owen Wilson have decided it’s time for him to be mainstreamed into a real school, for fifth grade.

That may sound like “Wonder” is just a younger version of the 1994 movie “Mask,” which starred Eric Stoltz, Cher, and Sam Elliott. The difference is that movie was about a blue-collar family in a small California town, and this one is about an upper-class family in New York City.

At school, Auggie encounters exactly the kind of bullying and ignorant avoid-the-guy-with-the-weird-face attitudes you would expect, but he manages to trudge through it, and eventually makes friends.
One of the aspects of this movie that works so well is telling it from more than just Auggie’s vantage point. We learn about his sister, Via, as she struggles with some social issues in high school, while also recognizing that, at home, her parents have spent most of the last 10 years taking care of her brother at her expense. We see things from the perspective of Jack, a boy who may or may not turn out to be Auggie’s best friend at school, and Miranda, Via’s longtime friend. Oh, and there is a cute dog, too.

Tremblay is very good as Auggie, and you are never aware of the make up that has turned him into this character. He’s sweet and smart, so you are rooting for him from the first moment you see him on screen. It is good to see Roberts’ big, wide smile again, and Wilson is, well, Wilson. The cast also includes Mandy Patinkin as the principal of Auggie’s school, and a very short appearance by Sonia Braga.

Unfortunately, “Wonder” ends on a cheap, sentimental finale that felt tacked on. There are other storylines that seem designed expressly — and try to hard — to tug at your heartstrings. Still, the rest of it is very family friendly, and I think a lot of adults — and especially kids — will enjoy seeing this story.