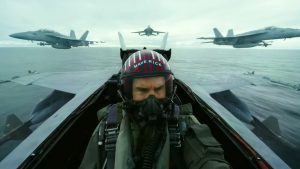 Something amazing occurs in “Top Gun: Maverick.” Tom Cruise appears next to an actor who is much taller than he is. I don’t recall seeing that before, even when he co-starred with ex-wife Nicole Kidman. She towered over him in real life, but never on the screen.

But that scene in this new movie doesn’t detract from the fact that Cruise still looks every bit the major movie star he’s been for four decades, complete with that famous megawatt smile.

He puts it to good use in “Top Gun: Maverick,” a sequel to the 1986 blockbuster that probably did as much for naval aviator recruitment as “All The President’s Men” did for journalism wannabes.

So, what’s changed in 36 years? Well, Kelly McGillis is nowhere to be seen as Cruise’s love interest. Instead, we get Jennifer Connelly, who looks almost as good in middle age as he does. Instead of Tom Skerritt and James Tolkan, Jon Hamm and Ed Harris now play the authority figures Cruise’s character, Pete “Maverick” Mitchell, just has to defy.

Also, unlike its predecessor, the new cast isn’t just a bunch of white guys having fun in the sun. There are several women and people of color in positions of authority — including in the cockpit — and none of them get caught up in intra-squad relationships that would just get in the way.

As for the plot, Maverick and the pilots he’s now training have to hit a small target in a dangerous place, then get out of there before they’re shot out of the sky. It’s a simple plot, lifted right out of the first “Star Wars” movie, complete with Maverick recalling the words of his old friend Goose (Anthony Edwards) in the same way Luke Skywalker heard Obi-Wan Kenobi in his head. Forget about The Force, use The Goose, Maverick!

To make the “Star Wars” analogy even more obvious, the enemy pilots Maverick et al encounter in the air all have black helmets and visors, obscuring their faces in the same way the planes bear nothing identifying their nationality. It’s not the Russians or the Chinese or some other totalitarian regime, it’s just “the enemy.” After all, those countries have theaters the producers of “Top Gun: Maverick” want to exhibit their movie, too.

As part of Maverick’s new squad, Goose’s son is played by Miles Teller — with a mustache made to look just like dad’s. Another old Maverick pal, Iceman (Val Kilmer) makes an appearance just long enough to yank at the audience’s emotional chains. And there are still photos of Goose’s ex-wife, Meg Ryan, on a wall (does she get paid for that?).

The bottom line in a movie like this comes down to the action sequences, and the ones in “Top Gun: Maverick” are pretty amazing. I’m curious to know how much of the flying footage was done with practical effects as opposed to CGI. I can fully believe it’s Cruise in the cockpit, shot by a GoPro camera inches from his face. But I’m not sure I buy the publicists’ claims that he taught the other actors how to fly F-18s so they could do the same. Can you really teach people with no experience to fly a military jet in the time it takes to prep a movie?

At the screening I attended, the audience burst into spontaneous applause at the end. It was the kind of enthusiastic response not a lot of movies receive, an indicator that “Top Gun: Maverick” will be a very big crowd-pleaser when it opens this weekend. It will bring a lot of people into movie theaters. It’s no wonder that Cruise — one of the executive producers — said he would never allow this movie to debut on a streaming service. It really should be seen on the largest possible screen to experience the speed of the dogfights, the tension of the attack runs, and the sight of a big-time movie star doing what he does best.

Derivative though it may be (it’s a sequel, after all), with plot developments you can see coming at you at Mach 9, “Top Gun: Maverick” delivers on its promise of good, escapist entertainment in a way few other titles will this year.