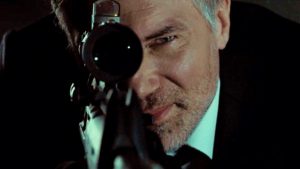 Just days after Anthony Hopkins won the Best Actor Oscar for his phenomenal work in “The Father” (which I reviewed here), he shows up in a supporting role in an absolute dud called “The Virtuoso.”

It’s the first feature script by James C. Wolf, whose writing is so lazy he doesn’t even bother to give his characters names. Hopkins is The Mentor, an ominous figure who gives orders to a professional assassin known simply as The Virtuoso (Anson Mount). In voiceover, as we see him killing a target from an apartment across the street, the hit man explains the precision, preparation, timing, and anonymity his job requires.

Because the character doesn’t speak much, the narration is necessary to allow us to understand what’s going through his mind. After a hit goes wrong and an innocent woman is killed, he’s filled with doubts and remorse, which he shares with The Mentor. Hopkins’ character is a cool, steely type who recognizes weakness in his protégé, but sends him off on another job to take out a mystery target in a small town diner.

When he gets to the restaurant, we hear our hero’s inner thoughts as he assesses the few people inside. There’s a lone man (Eddie Marsan) in the corner. A couple (Diora Baird and Richard Brake) at one of the tables. A blond waitress (Abbie Cornish) behind the counter. A sheriff’s deputy (David Morse) comes in. Who might be a threat and who is he supposed to kill?

It would seem to be a tense situation, but you wouldn’t know it from Nick Stagliano’s tepid direction and Wolf’s sparse script. “The Virtuoso” never makes clear on whose behalf Hopkins is ordering these hits — or why he wears sunglasses indoors in a dark room but not outdoors on a sunny day. It’s the kind of movie that tries to convince us its protagonist has a heart by having him feed a stray dog which shows up at his cabin in the woods, where he’s retreated after being haunted by flashback images of the dead woman. Oh, and don’t bother asking how he lives off the grid, yet has wifi service and can use a laptop to look things up so far away from civilization.

The only time “The Virtuoso” comes to life is when Cornish is on screen as the diner waitress. Her flirty repartee with the hit man almost reveals a crack in his hardened exterior, perhaps enough to get him to take his eye off the ball. Unfortunately, Mount’s performance is so one-note and stiff I never found myself rooting for him, but wondering how all the other talented actors got involved with this drudgery. Oh, and I saw the semi-surprise denouement coming a mile away.

Opens in theaters today and on DVD next Friday, May 4th.