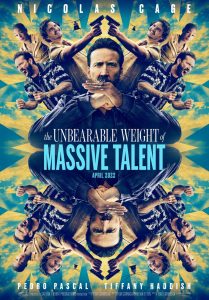 “The Unbearable Weight of Massive Talent” is a self-aware satire in the vein of “Being John Malkovich” and the underrated “Last Action Hero.” It stars Nicolas Cage as himself, a movie star whose best projects are far behind him, so he can’t get cast in big titles by big directors anymore.

When his agent (Neil Patrick Harris) tells him about an offer to fly to Europe to spend a weekend in Majorca with Javi Gutierrez (Pedro Pascal), a super-rich super-fan, Cage is at first insulted. But when something else he’d hoped to star in falls through — and his business manager explains his accounts are almost drained — he accepts. Then he’s contacted by two CIA agents (Tiffany Haddish and Ike Barinholtz), who tell him Javi is an arms dealer who has kidnapped the daughter of a politician who, well, nothing about this twisted plot matters.

The only reason to see “The Unbearable Weight of Massive Talent” is to see Cage play with his own image. There are lots of references to the hit movies he starred in, including “Face/Off,” “ConAir,” “Guarding Tess,” “Gone In 60 Seconds,” and “Leaving Las Vegas,” but not my favorite, “Matchstick Men.” Javi even has a room full of Cage memorabilia.

But that’s not all. Thanks to the same de-aging digital technology that made Samuel L. Jackson look 30 years younger in “Captain Marvel,” Cage also plays Nicky, a younger and even more over-the-top version of himself the older Nick interacts with.

The result is a clever mix of buddy movies, car-chase-and-gunplay action movies, and drunk-divorced-dad movies (with Sharon Horgan and Lily Sheen as his ex-wife and daughter). It’s all stirred together nicely by writer/director Tom Gormican without Cage giving away that he’s completely in on the joke (no one winks at the camera).

As a viewer, it’s best not to worry about how the story develops or why certain characters do what they do. Just go along for the ride.

“The Unbearable Weight of Massive Talent” has been playing in theaters for a couple of weeks, but I just got around to it. I’m glad I did, because I rate it an 8 out of 10.