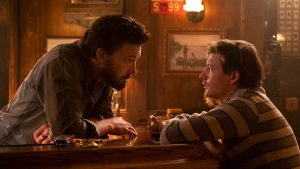 Directed by George Clooney, “The Tender Bar” is based on JR Moehringer’s 2005 memoir of growing up in the late 1970s in the Long Island town of Manhasset. I’m familiar with the place, because my hometown was Roslyn, right next door — and I kept spotting things that didn’t ring true.

For instance, I could tell immediately that “The Tender Bar” was not shot in Manhasset or anywhere else on Long Island. The homes look too much like they’re in the suburbs of Boston, not New York. It turns out that most of the filming did take place in eastern Massachusetts — from a screenplay by William Monahan, who’s from Dorchester, 15 minutes south of Boston.

Moreover, none of the characters has anything close to the stereotypical Long Island accent. In fact, many of them sound like they’re from New England, too.

That would include Ben Affleck, who plays JR’s Uncle Charlie, the neighborhood bartender/philosopher who could be an older version of Chuckie, Affleck’s character from “Good Will Hunting.” He dispenses life advice to his nephew, particularly about the “male sciences.” But none of it is very deep: don’t play sports, don’t hit women, read a lot of books.

JR spends a lot of time at Charlie’s bar because it’s the only place he has a father figure. His biological dad (Max Martini) abandoned JR and his mother (Lily Rabe) and doesn’t pay child support, but shows up on rare occasions for brief encounters with his boy.

There’s one scene where the father comes to pick up JR, ostensibly to take him to a Mets game. But he’s late, of course, so they don’t go to Shea Stadium. Instead, we see the father driving JR around the block in a single shot through the windshield. Then, after only a minute or two, they pull up in front of the same house and the father dismisses his son, as if they’d had some real quality time. It reminded me of a scene from Albert Brooks’ “Modern Romance,” in which he picks up his date at her apartment building, then drives her around for about thirty seconds before depositing her back in front of the building, saying, “I’m dating too soon, Ellen. I’ll call you.”

Here’s a second point that irritated me about “The Tender Bar.” The father is a Top 40 DJ in New York, another area where personal history skewed my view of the movie. Not only did I grow up listening to some of the best disc jockeys in the country for many years, but I also spent part of my radio career on the air in the nation’s largest market).

Anyway, this DJ, the father, only refers to himself on the air as The Voice. Nope, never would have happened. Even with basso profundo vocal abilities, I don’t know any radio program director who would allow one of his jocks to use that nickname. It’s more likely this guy would have been The Schmuck.

Point three: The Voice doesn’t have nearly enough energy for a Top 40 DJ of that era. It’s clear Clooney didn’t bother to do the kind of radio research that Quentin Tarantino did for “Once Upon A Time…In Hollywood.” In my review of that movie, which made my Best Of 2019 list, I wrote:

There’s another unseen character in “Once Upon” — Boss Radio 93 KHJ, which was the most popular radio station in 1969 Los Angeles. It’s blasting out of every car in the movie, a recurring presence analogous to Wolfman Jack on the soundtrack of “American Graffiti.” Tarantino even uses actual audio of the station’s morning and afternoon drive stars, Robert W. Morgan and The Real Don Steele, in between the hits and classic Johnny Mann jingles.

If Clooney had merely listened to airchecks of WABC, New York’s dominant radio station in the seventies, he would have gotten a better sense of what The Voice should have sounded like. That would have included never talking over the vocals of a song, which The Voice does on at least one occasion with the Grassroots’ song, “Sooner or Later.”

What irritated me as soon as I heard that error was Clooney could have fixed it easily. Since Martini is never seen in a radio studio, I’m sure he recorded his voice without hearing the song he was introducing, and the music was added in post-production. Thus, it would be incredibly easy for Clooney to tell his editor, “No, he can’t speak over the first line of the song. Move that back a couple of seconds so The Voice hits the post, like any professional DJ (then or now) would do.”

Point of annoyance number four: in another scene, Uncle Charlie and some of his bar regulars take JR to a bowling alley. But it’s candlepin bowling, which is played with a completely different ball (about the size of a softball) and much narrower, smaller pins. I couldn’t recall ever seeing a candlepin bowling alley in my youth, so I checked with Bill, my oldest friend, who has spent almost his entire life on Long Island. He confirmed that there has never been a candlepin bowling alley anywhere near Manhasset.

You know where candlepin bowling is popular? Yep, New England — especially Boston. Didn’t anyone from Long Island work on this movie?

At this point, I realize I’ve written so much about the pieces of “The Tender Bar” that bugged me that I’ve ignored plot points like JR’s time at Yale, his attempt at a romantic relationship with a classmate from an upper class family, and his brief employment at the New York Times.

Nor have I discussed the trials and tribulations of his mother, who’s so broke she and JR have to move back in with her father (Christopher Lloyd). That was a full house, considering there was also room for Uncle Charlie and other family members.

So, do I have anything positive to say about “The Tender Bar”? Sure. Affleck, Rabe, and Lloyd all give very good performances, and the three guys who play JR do a fine job. I should add that it’s not a terrible movie — but it is below average and thus a disappointment considering the talent involved.

I give “The Tender Bar” a 4 out of 10. Opens in theaters tomorrow and streaming on Amazon Prime Video January 7th.