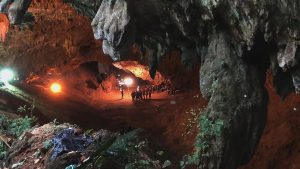 I’ll cut to the chase: “The Rescue” is one of the best documentaries I’ve watched this year.

It re-tells the story from 2018 of the rescue of a Thai soccer team, consisting of a dozen boys and their coach, who had gone off to explore some caves, then became trapped when monsoons rolled in and flooded the chambers, leaving them stranded deep inside.

Directed by E. Chai Vasarhelyi and Jimmy Chin (they won an Oscar in 2019 for directing “Free Solo”), “The Rescue” includes some amazing footage of the teams who went in and brought the boys out. They were led by two amateurs, middle-aged British hobbyists who are the best cave divers in the world, with skills even Navy SEALS didn’t have. The film does incorporate some scenes re-created in a studio tank, but they include original rescuers, and they’re seamlessly interwoven with actual footage shot during the crisis. There’s one scene that’s particularly moving, of the hopeful look on those 11-to-13-year-old boys’ faces when, after 8 days trapped, with no food and limited oxygen, they saw the divers emerge from the water in their chamber for the first time. Wow.

The most remarkable aspect of “The Rescue” was the decision to get the kids out by sedating them with Ketamine, Atropine, and Xanax. The thinking was that the boys, who had no diving experience, would panic during the nearly three hours it took to swim through the flooded areas. It was a preposterous idea, but there were no other good options. Still, one rescuer said putting a sedated boy’s face in the water with his hands tied behind his back “felt like euthanasia.”

Parts of “The Rescue” were tough for me to watch. I used to scuba dive, but never went into any caves because I suffer from claustrophobia. Watching the divers squeezing through extremely tight spaces in the dark, murky water had me a little bit freaked out. Nonetheless, I stuck with it and — like “Apollo 13” — even though I knew the outcome, I felt the tension of the task all the way through to the end.

“The Rescue” tracks the decisions made by the lead divers, the friction they encountered with Thai authorities, and the enormity of the volunteer corps — some 5,000 strong — who all contributed to the success of the mission. I was caught up in every aspect of it, and couldn’t get some of the images out of my mind for a couple of days after seeing it.

That’s why I give “The Rescue” a 9 out of 10, which will earn it a spot on my year-end Best Documentaries Of 2021 list. Opens in theaters tomorrow.