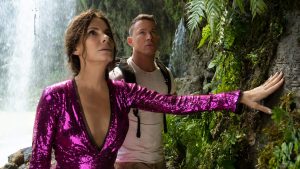 I had low expectations as I walked into a screening of “The Lost City.” It looked like to be a cheap ripoff of “Romancing The Stone,” the classic 1984 adventure-romance-comedy with Kathleen Turner and Michael Douglas. But as I walked out, I had a smile on my face.

One reason was the star-powered chemistry of Sandra Bullock and Channing Tatum. Although I haven’t always enjoyed her movies, I’ve long respected Bullock for her comedy chops and physical comedy dexterity. She shows those talents off repeatedly in “The Lost City,” along with an attitude that’s almost saying to the audience, “Yeah, I know this sequined magenta onesie is a ridiculous outfit that I have to keep pulling on to keep my breasts from popping out, but watch me make this work.” Spoiler: she does.

Bullock plays Loretta Sage, a successful author of romance-adventure novels who’s more comfortable at home than out in the world, but her publisher, Beth (Da’Vine Joy Randolph), insists she do a book tour for her latest release. At her first appearance, she’s teamed onstage with Alan, the model who appears on the cover of Loretta’s books as Dash, the hero of her stories. He’s the kind of dumb hot guy her female readers want to see shirtless more than listen to whatever she has to say.

When that goes south, Loretta walks out and is whisked away by some goons working for Abigail Fairfax (Daniel Radcliffe), an ultra-rich guy who is determined to find a secret treasure buried at one of the exotic locations Loretta wrote about. He demands she translate a piece of old parchment which will provide a clue to untold riches and power. When she can’t produce an answer in the room, he kidnaps her and they fly to some island in the middle of the Atlantic Ocean.

Alan, meanwhile, is left behind with Beth. Determined to rescue Loretta back, they hire a mercenary named Jack Trainer, played by A Major Movie Star whose identity is supposed to be a surprise. I would have played along with that if the studio hadn’t released a trailer for “The Lost City” in which you can clearly see it’s Brad Pitt. Alan insists on going along, partly to preserve his career as a cover model for Loretta’s books, and partly to prove he’s more than the walking cliché she assumes him to be.

Before long, we’re in the jungle with Bullock and Tatum being chased by Radcliffe’s goons. She’s still in the magenta outfit while he’s in full Wannabe Hero mode. Of course, her initial animosity towards him fades, just as it did for Turner towards Douglas in “Romancing The Stone.” There’s even a copycat scene in which they dance together in a town square after changing into conveniently-available new clothes. But directors Aaron and Adam Nee clearly understood the comparisons that would be made, so they poked at the notion a couple of times, including a banner at Loretta’s book tour venue that reads, “Romancing The Story.”

It’s that winking knowledge of what they were creating that appealed to me, along with Bullock’s crazy physicality. Tatum matches her step for step, both on the dance floor and in the jungle chase scenes. And yes, his shirt comes off several times, including a scene in which, after crossing a river, she pulls leeches off his naked body. It’s a throwback to Katherine Hepburn and Humphrey Bogart in “The African Queen,” except that Bogie never had Tatum’s six-pack. And, though his name was Charlie Allnutt, he never turned around so that his junk was in Kate’s face.

As for the supporting cast, Randolph — who was so good in Eddie Murphy’s “Dolemite Is My Name,” which I reviewed here — turns Beth into a force of nature and commands every frame she’s in. Pitt continues to play with his screen-idol reputation as Trainer, clearly having fun with the role. Unfortunately, no one told Radcliffe he didn’t have to shout most of his lines while portraying the villain, so he ends up chewing the scenery every time he’s on camera.

Is this a great movie? Certainly not. But it’s been a long time since we’ve had a good, dumb, popcorn movie in March, and “The Lost City” qualifies as that. Most of the people at the screening seemed to have fun going for the ride with Bullock and Tatum. I have to admit, so did I, despite its faults and absolute silliness.

I’ll add a nod for the cinematographer, production designers, and special effects teams who created (virtually, I’m sure) some of the best-looking jungle waterfalls I’ve ever seen on screen. Kudos as well to whoever applied the double-sided tape that kept Bullock’s chest covered while running in that ridiculous magenta outfit.