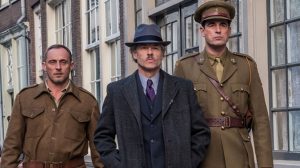 Given that, you’d think a film described as an “art thriller” wouldn’t be up my alley, but I really enjoyed “The Last Vermeer” (which is not to be confused with “Tim’s Vermeer,” a 2014 documentary produced by Penn Jillette and directed by Teller).

What makes “The Last Vermeer” work is there are no chase scenes, extended fist fights, or gunplay. Instead, there’s a battle of wits between Piller and Van Meegeren, who insists he’s not guilty of the crime with which he is charged. Piller, acting on behalf of the Allied provisional government, also has to put off agents from the Dutch Ministry Of Justice, who have their own ideas about what to do with Van Meegeren.