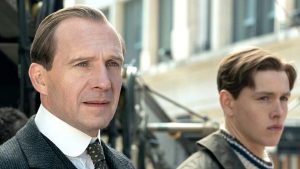 This will be a simple review to write. “The King’s Man” is absolutely horrible. An utter waste of time. A contender for worst movie of 2021.

It’s a prequel to 2014’s “Kingsman: The Secret Service” and 2017’s “Kingsman: The Golden Circle.” Frankly, I’m surprised that either of those movies did well enough to convince 20th Century Studios to make another one. Then again, what should I expect from a company that hasn’t even updated its corporate name to 21st Century Studios?

I’ve written often that action movies require great villains. This one has Rasputin, Lenin, Kaiser Wilhelm, and Tsar Nicholas. You read that right. Some of the worst despots of the early 1900s. Too bad they’re all stupidly written, cartoonish, and badly overacted.

Meanwhile, the cliché-riddled heroes — played by Ralph Fiennes, Harris Dickinson, Gemma Atherton, and Djimon Hounsou — are stuck in a preposterous plot that involves the murder of Archduke Franz Ferdinand, which led to World War I. From there, it proceeds to, oh, why am I even bothering to explain this nonsense, which is unconvincingly filled with situations that exist merely to get us to another sword fight.

Director Matthew Vaughn, who also co-wrote this mess, makes bad choices over and over again, cutting away from the essential elements — particularly in fight scenes — to concentrate on the extraneous. He tries to make a mystery of the über-villain controlling the others, but it’s done in such a way that you’ll know the identity long before the reveal, and it’s all done so clumsily you won’t care. It’s the kind of movie where a father says to his son, “I will never let you go off to fight in a war,” thus guaranteeing the kid ends up in uniform, trying to prove himself in a sequence on a WWI battleground that looks like a scene Patty Jenkins cut out of “Wonder Woman” because it stunk up the joint.

“The King’s Man” was made in 2019, but sat on the shelf for two years during the pandemic. To paraphrase a Jerry Seinfeld line about Pop-Tarts, it’s not that the movie went stale, it’s that it was never fresh to begin with.