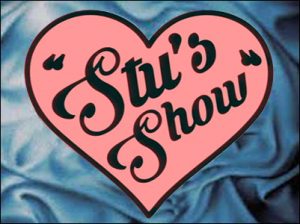 I was introduced to Stu Shostak by our mutual friend Mark Evanier, who has written often about Stu and his bi-weekly streaming show, which began as audio-only, but added video when the technology made it possible (and affordable). Stu’s favorite topic is television from the 1950s-60s-70s, and he’s hosted a slew of guests from that period. He’s even had me on twice — once in 2015, once in 2020 — for conversations that stretched to three hours or more.

Stu has led a fascinating life, which is why he’s the subject of a new documentary by CJ Wallis called “Stu’s Show.” It recounts his years as audience coordinator for several sitcoms, including as the warm-up guy on the nights the shows were recorded. It also delves into how he met Lucille Ball and worked as her personal archivist for a decade or so. Speaking of archives, Stu maintains a massive collection of TV episodes on film and tape, in practically any format you care to name, from which he occasionally sells copies via his Shokus Video site.

Along the way, Stu has become close friends with some TV personalities from his favorite era, from Ed Asner and Dick Van Dyke to Ken Osmond and Wink Martindale and many more. They not only appeared in the documentary, but attended Stu’s wedding to the love of his life, Jeanine Kasun, who shared his obsession with classic television and the people who made it.

The happy event followed months and months of frustration after Jeanine suffered a near-fatal brain aneurysm while on the phone with Stu. She ended up in a coma, and then needed extensive physical therapy and care. Fortunately, she had Stu as her advocate, and he was a bulldog, fighting for her every inch of the way through the insurance bureaucracy, uncaring doctors and nurses, and a health care system that would otherwise have treated her like garbage.

Wallis not only interviewed Stu and Jeanine, but also got some of his show business friends to open up about their relationships and the support they offered during the couple’s medical crisis. Fortunately, it has a happy ending which I don’t mind spoiling because it’s the journey that makes this good story better. It also serves as a reminder of the importance of having someone who will advocate for each of us — even if it means yelling and screaming — should we ever find ourselves in a similar situation.

I give “Stu’s Show” an admittedly biased 9 out of 10, which will put it near the top of my Best Documentaries Of 2022 list.

It is available via video on demand on multiple services, and “Stu’s Show” (the streaming series) is available live every other Wednesday on his site, with older shows in his archive. I see that on May 18th, Stu’s guests will be the people behind the movie, CJ Wallis and Mallory Kennedy.