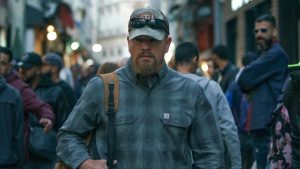 As “Stillwater” opens, Bill Baker (Matt Damon), a blue collar guy from Oklahoma, is working as part of a crew clearing out plots of land that have been torn apart by a tornado. The devastation surrounding him is a metaphor for his rough past, including alcoholism, drug addiction, the death of his wife, and some time in prison. Having lost a job on an oil rig, he’s taking whatever construction-related jobs he can find just to make ends meet in his very lonely existence.

But soon, we see Bill flying off to Marseille, France, where he’s going to visit his daughter, Allison (Abigail Breslin), who has been imprisoned for five years for the brutal death of her roommate and lover, Lina. It’s apparent this isn’t Bill’s first time making the trip, but Allison — who has always maintained her innocence — has some new information that might clear her. When Bill delivers this message to her attorney, he’s told why such flimsy hearsay evidence won’t convince the judge to reopen the case.

If this were a Liam Neeson movie, the rest of “Stillwater” would revolve around the father muscling his way around the city, zeroing in on the young man Allison believes was the real killer, and using his very special skills to help his daughter escape from the slammer. “Stillwater” does go down some of those roads, but in a much more subtle way, allowing Damon to play Bill as a low-key character. He’s intense and determined, but also at a disadvantage because he speaks no French and doesn’t know the local customs, or even how to get around the city.

For help, he turns to Virginie (Camille Cottin), an actress with a 9-year-old daughter named Maya (Lilou Siauvaud), who is cute without being precocious. Virginie agrees to serve as Bill’s translator as he takes on the investigation himself, and he develops a relationship with both mother and daughter that gives him a second chance to be the kind of father he never was to Allison.

My wife and I first spotted Cottin’s talents in a French Netflix series I’ve recommended before, “Call My Agent!” She has an utterly French look mixed with a sympathetic sexuality which is quite appealing. In “Stillwater,” she matches Damon step-for-step as Virginie and Bill grow closer. There’s a nice piece about Cottin in today’s NY Times.

That’s saying something, because Damon does some of his best work in “Stillwater,” proving he’s light-years ahead at playing this sort of everyman compared with Mark Wahlberg, who practically sleepwalks through “Joe Bell” (read my review here). Unlike smarter characters Damon played in “Good Will Hunting,” “The Martian,” and the Jason Bourne series, Bill is unafraid to admit he doesn’t know much, often referring to himself as “a dumbass.” He’s frustrated by the obstacles in his life, mostly of his own doing, and always seems on the verge of an exploding rage. Yet he manages to hold himself together as he stays on in Marseille to visit Allison more often in prison and try to find the mystery murderer — while simultaneously building a closer chemistry with Maya and Virginie.

Director Tom McCarthy knows how to get great performances out of his casts, as he did with Mark Ruffalo, Michael Keaton, Rachel McAdams, Liev Schreiber, Brian d’Arcy James, and John Slattery in the Oscar-winning “Spotlight” (as well as “The Station Agent” with Peter Dinklage and “The Visitor” with Richard Jenkins). He does it again here, right down to the smallest supporting characters. Despite the obvious parallels, this is not yet another retelling of the Amanda Knox story, as McCarthy is more interested in how Bill adapts to both the foreign environment and emotional issues he hasn’t handled very well before.

“Stillwater” is about 20 minutes too long, with several scenes that could have been shortened or left on the cutting room floor. But I was pleasantly surprised with the story, the performances, and the unexpected ending, so I’m giving it an 8.5 out of 10. Opens today in theaters.