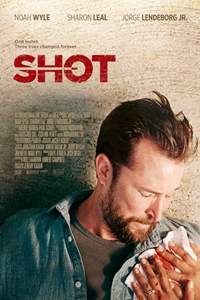 In “Shot,” a teen named Miguel is on one side of a Los Angeles street getting an illegal gun from his cousin so Miguel can protect himself against bullies at school. On the other side of the street, a man named Mark is walking down the street with his estranged wife Phoebe, trying to convince her not to divorce him. Suddenly, the gun goes off in Miguel’s hand and the bullet flies across the street in an instant and hits Mark in the chest, knocking him to the sidewalk. That’s not a spoiler, it’s the launching point of “Shot.”

We then follow the male leads in split screen: Miguel as he panics and runs away, hoping no one saw him and desperate to get rid of the gun; and Mark as he’s taken care of by paramedics (including Malcolm Jamal Warner) and then to the emergency room. It’s here that the movie gets a little odd, solely because Mark is played by Noah Wyle, who for fifteen years played Dr. John Carter on the TV series “ER” — but now he’s the patient, not the physician.

You won’t be alone in thinking this makes “Shot” seem like a “very special episode” of “ER,” or perhaps a TV movie-with-a-message. That may be because it was directed and produced by septuagenarian Jeremy Kagan, who spent forty years directing TV sitcoms and dramas, but only two other feature films, and it’s been a decade since his last one.

I have a feeling that Kagan, who came up with the story in the first place, wanted to say something important about how any random gun incident can wreak havoc on the lives of both the victim and the shooter, but it does it in such a heavy-handed way that it leaves the viewer bored and not much more. To get to the end credits, which begin with text that reinforces how many Americans are victims of gun violence every year, he’s forced us to sit through a story that doesn’t really draw us in, with characters that I never found myself rooting for — and that overly long sequence of Mark getting medical attention from the emergency room staff doesn’t help, either.

Since opening on September 22nd, “Shot” has been playing in exactly one movie theater in the St. Louis area, and it looks like that week will mark its only run here. I doubt it’s doing much business elsewhere, either.