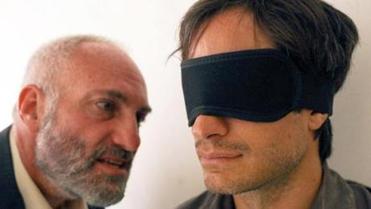 “Rosewater” is Jon Stewart’s directorial debut. If it weren’t, there would be no reason to see it.

The story is about Maziar Bahari, a journalist for Newsweek, who was arrested in Iran in 2009 while covering the election and the “green revolution,” which some thought would move that country from an autocracy to a democracy. It didn’t happen. Along the way, Bahari took video of protests, wrote stories about the opposition, and appeared in a “Daily Show” piece with Jason Jones, who claimed he was a spy. All of that led to Bahari being arrested and held in prison for over 100 days.

Gael Garcia Bernal is fine as Bahari, and Stewart’s direction (from his own script, based on Bahari’s book about his experience) is more than competent. But it’s not compelling. I was never invested in what was happening to Bahari. Perhaps that’s because Stewart shows us the mental games of the interrogations Bahari endured, but not the physical torture. Thus, his situation never seems that dire, even though he spends most of every day in solitary confinement.