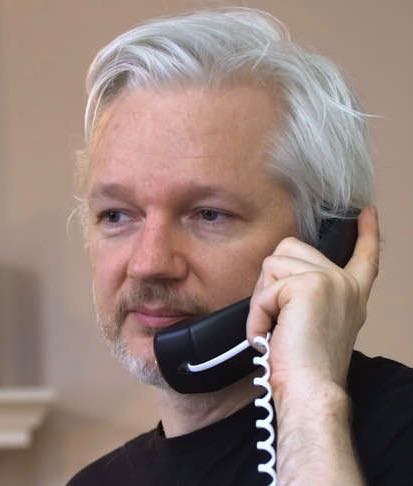 “Risk” is the new documentary from Laura Poitras, who won an Oscar for her Edward Snowden documentary “Citizenfour” in 2014. It debuts Saturday night on Showtime.

In “Risk,” Poitras gets extraordinary access to Julian Assange, the man behind Wikileaks. She keeps her camera trained on him and his inner circle as they plot to gather and release secret documents from around the world, as well as speaking out against online censorship and overzealous data-gathering. One of the more remarkable scenes shows a Wikileaks editor on a panel in Egypt during the Arab Spring, taking on the ISPs and telecoms that blocked the public from using Twitter in that country, yet claimed they were helping the revolution, not the Mubarek regime.

Throughout the movie you hear Poitras in voiceover with notes from her production journal. At one point, she says, “This is not the movie I thought I was going to make.” That’s because the focus turns to the accusations against Assange of sexual assault and rape by two women in Sweden. As he fights attempts to extradite him from England to Sweden — where he’s sure he’ll be sent to the US to face a secret grand jury investigation into Wikileaks leaking government documents — Poitras captures a meeting between Assange and his attorney, who tells him to be careful what he says in public about women. He then says a few ugly things about feminists that he admits he’d only say in private because they’re too raw for public consumption, and yet he must know that Poitras’ camera was on him the whole time. So how are those remarks private?

Assange is seriously paranoid — perhaps rightly so — which we get to witness in a scene where he is talking with a Wikileaks lawyer in the woods, away from prying eyes and ears (other than Poitras). At one point, he hears a noise behind him and is sure it’s two guys spying on him. And yet, he’s still comfortable having Poitras and her camera around.  Even after Assange is granted political asylum by Ecuador and allowed to move into its embassy in London, Poitras still gets inside to portray his life in a building he can not leave.

Later, the movie delves all too briefly into Wikileaks releasing tens of thousands of documents from the DNC and Clinton campaign staff — allegedly acquired by the Russians. Unfortunately, by then, Poitras is running out of movie and does not dig further into that story. Except for news footage of Hillary Clinton at the Democrat convention and Donald Trump becoming president of the United States, we’re left with no real resolution to the Assange story because it’s still playing out.

Since the movie screened at Cannes last year, Poitras and Assange have had a falling out. He has attacked her for spending so much time on the sexual assault claims against him, and considers the movie a threat to his safety. However, he’s wrong to view Poitras as the enemy while he has to worry about the Trump administration ramping up its efforts to put Assange in jail and shut down Wikileaks.

“Risk” isn’t nearly as good as “Citizenfour.” In the latter, Snowden comes off as a hero for revealing privacy-busting concerns about the US government. Meanwhile, in “Risk,” Assange comes off as an arrogant ass whose motives may have some good in them, but are mostly about his own ego.