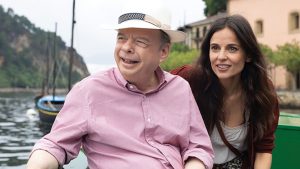 For the last several years, Woody Allen movies haven’t gotten much distribution in the United States. You can chalk that up to the negative campaign waged against him by Mia Farrow and some of her offspring. Or you could consider that he hasn’t made anything worth watching in almost a decade, since 2013’s “Blue Jasmine.”

His last two, “Rainy Day in New York” and “Wonder Wheel,” were simply horrible, and his latest, “Rifkin’s Festival,” isn’t much better.

“Rifkin’s Festival” takes place at the San Sebastián Film Festival in northern Spain. Sue Rifkin (Gina Gershon) has travelled there because she’s a publicist and several of her clients will be in attendance, including Philippe (Louis Garrel), a handsome director whose latest movie is creating some buzz. Sue’s husband Mort (Wallace Shawn) goes along because he’s jealous of all the attention she’s giving Philippe (to the exclusion of her other clientele, who we never see for even a moment).

Mort is merely the latest Woody simulacrum, the nebbishy New Yorker, “a walking smorgasbord of neurosis,” who writes reviews and teaches courses about films, particularly the old European cinema masters: Godard, Truffaut, and Fellini. That’s the director trifecta Woody has been bowing down to for decades, as if he’s never seen the work of anyone else in the last half-century. It’s as if Spielberg, Scorsese, Tarantino, the Coen brothers, and others don’t exist.

Mort, a hypochondriac (another Woody cliché), has chest pains and goes to see Dr. Jo Rojas (Elena Anaya), who he is immediately attracted to, even more so when he discovers she used to live in New York. Although there’s nothing wrong with Mort, he makes excuses to go back to her office until she agrees to show him around San Sebastián on her day off. Because that’s what married, female physicians do in Europe.

At night, Mort has odd dreams, played out in black and white, based on movies by those masters he adores (e.g. “Breathless,” “Jules and Jim,” “8½”). Intended to be witty satires, the dreams are as dry and unamusing as the scenes in which Mort is awake and walking around in his grandpa jeans. There’s also Mort’s narration, relating the goings-on to his therapist in flashback, an agonizing device that wears thin quickly.

Aside from the bland script, the performances are oddly stiff or over the top. You know a movie’s in trouble when even Christoph Waltz can’t save it. In a scene towards the end of “Rifkin’s Festival,” he appears as Death to play a chess game on a beach with Mort — a lift from Ingmar Bergman’s “The Seventh Seal.” He’s not there to take Mort yet, only to advise him to exercise every day and not eat saturated fats. What’s the opposite of comedy?

Do I have anything positive to say about Allen’s latest creation? Well, there are plenty of beautiful shots of the scenic surroundings. But in a setting like San Sebastián, I’m pretty sure I could have gotten the same result with the panorama setting on my iPhone’s camera. As my wife and I watched the movie, the only thing that made her perk up was when I pointed out Steve Guttenberg as Mort’s brother.

The most amazing thing about Woody’s continuing filmography is he’s still able to convince financiers to give him money, but I can’t imagine they get much of a return. According to BoxOfficeMojo, “Rifkin’s Festival” has only made $1.7 million — nearly half in Italy, for some reason. It was first released in September, 2020 (at the San Sebastián festival, naturally), but wasn’t exhibited in the US until January, 2022, in very few theaters and via video-on-demand (which is how I finally viewed it).

No one under 60 will even know “Rifkin’s Festival” exists, let alone see it, and I wouldn’t try to change their minds. This is ground Woody has trod too often — the meaning of life, the neurotic New Yorker, the older man/younger woman relationships, the deification of French new wave cinema, etc. Not only does he offer nothing new, the results of his effort are utterly humorless.

Perhaps instead of making movies, Woody would be better off watching one that was released in his children’s lifetimes.