Movie Review: “No Time To Die” 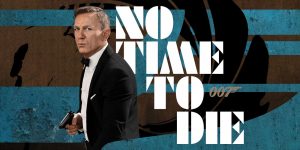 “No Time To Die,” the 25th movie in the James Bond series, doesn’t start with a spectacular action sequence as so many of its predecessors did. But you don’t have to wait very long before Bond is involved in a high-speed chase with bullets flying. Even then, there are no stunts that make you say, “Whoa!” or even doubt for one second that our hero will not only survive, but take out most of the bad guys.

As you’d expect, there are several similar scenes spread throughout “No Time To Die,” sewn into a script that includes two love stories for Bond — one with a character from a previous movie, and another who he seems forced to separate from early, only to have her re-introduced later and thrown into the center of the villain’s evil plan.

You’ll notice I’m not going into great detail about the plot, because it matters so much less than whether Daniel Craig’s charisma can still portray the famed British secret agent well enough to have us overlook the silliness that traditionally accompanies any Bond outing. He does his measured best, but he’s hampered yet again by not having a good enough villain to play against. Rami Malek just doesn’t showcase the malevolent insanity necessary for the role.

That becomes quite apparent when we get to see Christoph Waltz in a short scene as Ernst Blofeld, the longtime head of Spectre, now imprisoned for life. Waltz turns Blofeld into as sizzling a character as Anthony Hopkins did with Hannibal Lecter — restrained physically, but not mentally. Malek doesn’t overplay his villain, but he’s not helped by a weak script — the kind that includes his character having a pool filled with poison on his property, for no reason other than to have it appear in the movie’s final sequence.

During every quiet moment in “No Time To Die” — like those involving the young daughter of Bond’s lover, who gets swept up in the treachery as a hostage — I kept waiting for the action to resume. Fortunately, there are plenty of chases and fight scenes, including one especially well-choreographed sequence with Ana de Armas (Craig’s co-star in “Knives Out”) as a fellow agent taking out bad guys with both ammunition and fancy kicking.

One thing I learned from this movie is that grenades don’t hurt the good guy if he jumps away from them as they explode, but they’ll kill the bad guys every time. And, of course, the Action Movie Gunfight Rule applies throughout out — even when the villain’s top gunmen outnumber the hero, they can’t kill him — but every shot he fires takes one of them down.

As for the rest of the cast, Léa Seydoux is just fine as Bond’s love interest, as is Naomie Harris as the new Moneypenny, and it’s good to see Jeffrey Wright return as CIA spy Felix Leiter. Ralph Fiennes brings new gravity to Bond’s boss, M, while Lashana Lynch isn’t given nearly enough to do as another Double-0 agent working in Bond’s shadow.

Surprisingly, I found “No Time To Die” missing another essential element in most Bond movies — a sense of humor. Craig gets very few snarky lines to spout. Even Ben Wishaw’s Q spends more time looking at computer monitors and hacking into things than happily introducing new lethal technology for Bond to abuse.

At two and a half hours, “No Time To Die” is at least 30 minutes longer than it needs to be. The big screen is the best way to experience movies like this, and I won’t be surprised if large numbers of people return to movie theaters to see Daniel Craig take his last steps in Bond’s shoes after five cinematic adventures.