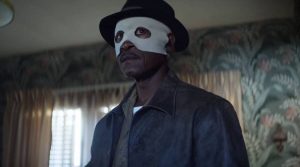 One of the common problems with noir movies is that the plot is often so dense it’s impossible to know exactly what’s going on. But in the cases of the really good ones, that doesn’t detract from their enjoyability.

Take “The Maltese Falcon.” Does the story behind the bird really matter, or is the fun simply watching Humphrey Bogart, Peter Lorre, Sydney Greenstreet, and Mary Astor reciting John Huston’s words? When you watched “Chinatown” the first time, did you really understand the whole stolen water plot, or were you okay just sitting back and watching Jack Nicholson, Faye Dunaway, and John Huston (again!) interact? To this day, I’m still not sure what the hell was going on in “Memento,” but Christopher Nolan had me riveted to everything Guy Pearce and Joe Pantoliano did.

The newest noir movie, Steven Soderbergh’s “No Sudden Move,” isn’t as great as those, but it shares many of the same characteristics, including the muddy plot, which takes place in 1954 Detroit.

It starts with Don Cheadle — who wears a hat better than anyone — walking down the middle of a street, cool as can be. Cheadle’s performances have always jumped off the screen, beginning with his breakout role as Mouse in 1995’s “Devil In A Blue Dress,” where he stole every scene he was in (even opposite Denzel Washington). In “No Sudden Move,” he’s Curt, recently released from prison, who’s offered a chance by Doug (Brendan Fraser) to make a few thousand dollars for a seemingly easy job. Curt is paired with Ronald (Benicio del Toro), a tough guy with a racist streak that means he’s not thrilled with his newly-assigned partner.

The job is to guard a wife and two kids while the husband is taken off to work by a third criminal, Charley (Kieran Culkin), who will force him to open a safe and extract some valuable paperwork. Then they’ll return to the house, where everyone will go their separate ways. At least, that’s the plan, which Curt and Ronald quickly figure isn’t the whole story. Pretty soon, things get messy, mob bosses (Ray Liotta and Bill Nunn) get involved, and we start to realize that the paperwork — this movie’s McGuffin — has to do with some shady goings-on at the big car companies.

That leads us to a scene featuring a big star (whose name I will not spoil, but he’s a Soderbergh regular) who gets to give this movie’s equivalent of Ned Beatty’s “You have meddled with the primal forces of nature” speech from “Network.” Oh, and Jon Hamm’s along for the ride, too, playing yet another of his law enforcement guys (e.g. “The Town,” “Bad Times at the El Royale,” “Richard Jewell”), a role he’s now played almost as often as Don Draper.

Screenwriter Ed Solomon has cooked up a heady stew, and Soderbergh creates an interesting look by using odd lenses at times, but most of the fun of “No Sudden Move” comes from the byplay between Cheadle and del Toro as colleagues who mistrust each other yet realize they must work together to get the most out of what is obviously a precarious situation. That’s what makes this noir tick.