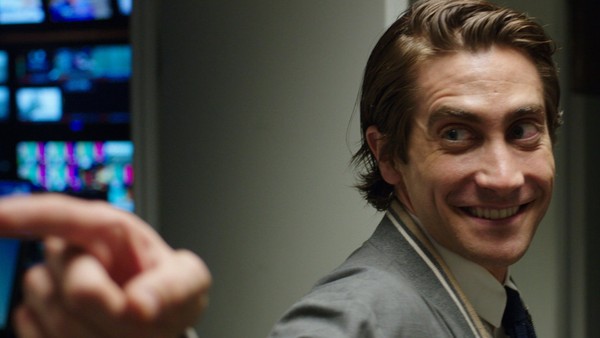 The central character of “Nightcrawler,” Louis Bloom (Jake Gyllenhaal), is a creep, a desperate loser who lives on the edge of society, stealing and scamming his way through life, until he discovers a profession he’s fascinated with.

Late one night, he stumbles upon an auto accident, with cops and EMTs doing their thing, when a video crew rolls up and starts recording the gory scene. He asks the videographer (Bill Paxton) what he’s going to do with the footage, and is intrigued when he’s told it will be sold to one of the local TV stations for use on their morning newscast.

Bloom is drawn to this idea so much that he gets his own video camera and police scanner and starts racing to the scene of other accidents and crimes, where he shoots some video, then takes it to the last-place TV station in LA to sell. News director Nina Romina (Rene Russo) writes him a check and encourages him to bring her more. She gives him a lesson in what she wants — scenes of urban crime creeping into the suburbs, with blood and vivid images — that she can use as lead stories, complete with fear-mongering graphics. Naturally, Bloom is driven to find more extreme footage for Nina, and the more he delivers, the more he forces her hand with demand after demand.

This is a side of the media that hasn’t been shown on a movie screen before, although it’s been a very big part of local TV news for decades — if it bleeds, it leads — and “Nightcrawler” gets it all right. Gyllenhaal’s Louis is a combination of Travis Bickle and Rupert Pupkin, while Russo’s Nina is all about phony images, right down to the severe eyeshadow she wears in a failed attempt to make herself more appealing. But she’s drawn to him, and vice versa.

I enjoyed the hell out of “Nightcrawler.” It’s a very different role for Gyllenhaal, and very good work by writer/director Dan Gilroy (Russo’s husband), who also wrote the Jeremy Renner outing, “The Bourne Legacy.”