Movie Review: “The Mountain Between Us” 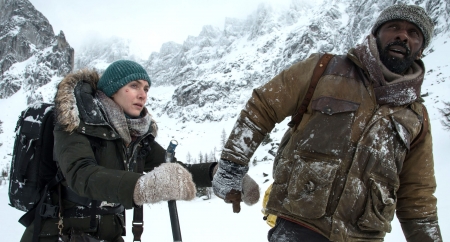 Idris Elba and Kate Winslet just want to get home. She has to get to her wedding the next day in New York, while he has to operate on a patient in Baltimore. However, they’re stuck at an airport in Idaho, where a snowstorm has grounded all commercial flights. Desperate to get out of there, he agrees to go along with her in chartering a private plane to Denver, where they might be able to catch another flight east.

Unfortunately, the charter pilot, Beau Bridges, has a stroke in mid-air and the plane crashes in the snow-covered Rockies. He’s dead, leaving only Kate, Idris, and Beau’s dog to survive and find a way to civilization. Fortunately, Idris is a surgeon, so he can take care of both Kate and the dog when they are wounded. She’s a photojournalist, so she can, um, let’s just say she’s up for an adventure. As for the dog, well, you don’t think the filmmakers are going to let a dog die on a mountain, do you?

The scenery is beautiful — kudos to the location scouts who found the untouched wilderness where the movie was shot — but Idris and Kate don’t have much chemistry, an essential element in what is basically a two-hander story of love and survival. Worse, nothing happens in “The Mountain Between Us” that you won’t see coming a mile away, even without one of Kate’s telephoto lenses.