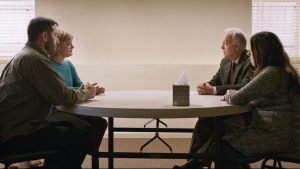 The story is simple. The parents of a school shooting victim sit down face-to-face with the parents of the boy who killed their son (and several others). The adults have signed some paperwork in the hope the meeting will be therapeutic, as it takes place years after the horror, the commensurate lawsuits, and the memorials. There’s no one else in the room to guide the discussion, but it’s clear they’re all wounded, vulnerable, defensive — and exhausted.

In the hands of lesser actors, “Mass” could come off as maudlin, even exploitative. But the parents are played by a quartet of terrific character actors — Ann Down, Reed Birney, Martha Plimpton, and Jason Isaacs. Watching their performances is like sitting in on a master class in how to play devastating grief and unimaginable pain. They each get big speeches, some heartbreaking, none more so than the victim’s father describing what he saw at the crime scene and the tick-tock of the shooter’s actions.

For their part, the parents of the gunman try to make the case that, though they agree they missed signs of their son turning bad, they didn’t know what to do to help or stop him. Meanwhile, the parents of the victim lament that, as with all school shootings, nothing has changed in the aftermath. Oh, sure, people sent their “thoughts and prayers,” but no laws were enacted that might prevent such incidents in the future.

Director/writer Fran Kranz mostly lets his cast do what they do best, leaving dramatic pauses in at the right times. Unfortunately, he unnecessarily delays the entrance of the four leads by 15 minutes, thus getting the movie off to a very slow start. Part of that includes two of the parents sitting in their car before the meeting starts, getting ready for the emotional rollercoaster to come. But as they drive off, Kranz lingers on a field with a fence in the foreground and — inexplicably — cuts back to that shot twice later on, just after a couple of very intense scenes. The cuts don’t signify a time lapse, and are so abrupt that they pulled me out of the conversation and the heightened, almost claustrophobic  atmosphere of the room the parents are in. When combined with a final segment that seems tacked on, what should have been a tight ninety-minute movie gets bloated to an hour and fifty minutes.

Still, I recommend “Mass” for the pleasure of watching these four actors give tour-de-force performances. I give it an 8 out of 10.