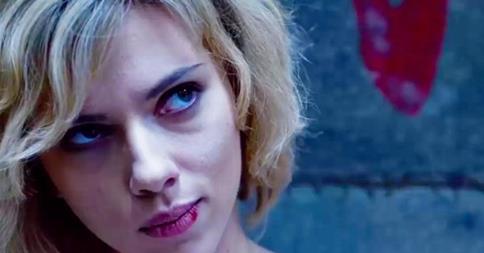 “Lucy” may have won the box office this weekend, bringing in an estimated $44 million, but as with so much summer fare, that doesn’t mean it’s a good movie.

The initial idea is a good one. Scarlett Johannson gets dragged into a scheme to smuggle a new drug from Taiwan to Europe. It’s a blue crystal (though not as pretty as the stuff that came out of Walter White’s lab), and a bag full of it is sewn into the bellies of ScarJo and three others who have been recruited against their will by some mob boss and his group of generic tough guys. When she gets roughed up by one of the thugs, the bag ruptures and its contents spill into her blood stream.

Meanwhile, Morgan Freeman is giving a university lecture about how we only use 10% of our brains, and posits what would would happen if we could utilize more of our gray matter. It’s another example of Freeman in the role of Guy Who Explains Everything To The Audience, because without his exposition, we would never understand what’s going on.

This is the section of the film that should be labelled bullshit, because that whole 10% claim isn’t true. In reality, we all use our entire brain, but that 10% line is the sort of thing spouted by psychics and other con artists who want you to believe that they’ve tapped into more brain power than you’re able to, thus imbuing them with special powers. It’s nonsense, pure and simple.

In “Lucy,” the blue crystals in her system make ScarJo much smarter and give her special powers. She can move people and objects, project herself through TVs and telephones, speed through traffic even though she’s never driven a car before, etc. Those special effects and stunts are the only reason for the last half of the movie, which itself is a mere 85 minutes long because after the original idea and a few chase scenes, there’s nowhere else to go. As my radio colleague Colin Jeffery pointed out, director Luc Besson is kind enough to help you know how much more of this trash you have to sit through by putting a graphic on the screen showing Lucy’s brain power increases — now she’s at 40%, now she’s at 50%, now she’s at 80%, so this will all be over soon.

Besson was already responsible for one of my worst-of-the-year nominees, having written the Kevin Costner movie “Three Days To Kill.” Now, he’s a double nominee for “Lucy.” Not only is the plot poorly constucted, but Besson makes other directorial choices, like an ending montage of Lucy traveling back through time in a sequence that recalls the finale of “2001: A Space Odyssey” (and is just as confusing). He also has ScarJo talk more like a synthesized computer voice as her brain power increases.

Too bad he didn’t bill “Lucy” as a prequel to the much superior “Her,” in which ScarJo was the voice of Samantha, the computer operating system, which would have been the logical next step for her highly developed artificial intelligence.

If you want to see much better movies around similar themes, I’d suggest “Charly” (1968) starring Cliff Robertson as a mentally handicapped man who undergoes an experiment that makes him a genius (based on the book “Flowers For Algernon”), or try “Phenomenon” (1996) with John Travolta as a regular guy who, after seeing a bright flash in the sky, suddenly gains knowledge and abilities he’d never had. The cast of “Phenomenon” includes Forest Whitaker, Kyra Sedgwick, and Robert Duvall in a wonderfully compassionate role as the town doctor who is stumped by what caused Travolta’s new talents.

You’ll have a much better time with those suggestions than with “Lucy,” which 90% of your brain will reject as stupid and a waste of time.