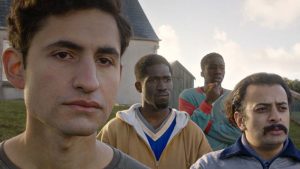 “Limbo” is the story of refugees from war-torn countries who fled to Europe and ended up on a small Scottish island, where they await a decision on their asylum applications. The central character is Omar, a Syrian, who shares quarters with an Afghani, a Ghanaian, and a Nigerian.

Omar spends his days wandering the vast open spaces, sitting on a dune overlooking the beach, or waiting to use a pay phone in the middle of nowhere to call his parents, who have abandoned Syria for Turkey. Wherever he goes, Omar carries a mandolin-like instrument called an oud that used to belong to his grandfather. We’re told Omar loves to play but, because his has a cast on one of his arms, we don’t get proof. Instead, the oud remains in its case and serves as nothing more than a prop.

None of this is compelling. “Limbo” is merely a series of mundane scenes of mundane lives. Imagine being forced to sit in the DMV office with nothing to read and no one interesting to talk to. Even when the four men join their fellow refugees on the island at a “cultural awareness” class run by two inept local residents, nothing engrossing takes place. I debated whether the scenes were supposed to be amusing breaks in the mundanity but, if so, they fail.

Blame for this mess belongs to writer/director Ben Sharrock, helming his first feature. Not only did he give his actors very little to do, he also favored broad shots of the countryside over character development. To make matters worse, Sharrock includes subtitles when the refugees speak to each other in Arabic, but none for the heavy brogue of his Scottish characters.

“Limbo” does show the desperation of refugees trying to join a new society, but it is labored and boring, two words that never make a movie worth watching. I give it a 2 out of 10.

Opens Friday in theaters, with no streaming plans announced.