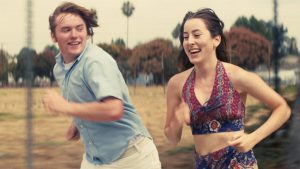 It’s high school picture day, and Alana is a photographer’s assistant, asking the students in line if they’d like a comb and mirror to fix their hair. She’s bored by the job, but 15-year-old Gary is smitten as soon as he sees her. At first, Alana isn’t interested in this boy who’s a decade younger than she, but there’s something about his personality, his hustle, and his smile that piques her curiosity. Their platonic relationship serves as the thread running through Paul Thomas Anderson’s “Licorice Pizza,” a coming-of-age tale set in the San Fernando Valley outside Los Angeles in 1973.

I hesitated to use that phrase, “coming-of-age,” because it makes the movie sound like yet another run-of-the-mill movie about teenage lust. This is so much more than that, with well-crafted characters having engrossing adventures — plus stunning performances by its two young leads and an outstanding supporting cast, too.

Gary is a child actor constantly looking for new opportunities, whether it’s selling water beds or opening a pinball machine parlor once they’re legalized in California. Alana, the dreamer, goes to work for a local politico’s campaign, giving Anderson an opportunity to do an homage to Martin Scorsese’s “Taxi Driver,” when she becomes unsettled by a creepy guy outside the campaign office, a la Cybill Shepard’s reaction to seeing Robert De Niro staring at her from his cab outside Charles Palantine’s street-level office. There’s even another campaign staffer who, like Albert Brooks in the Scorsese classic, goes outside to confront the sidewalk stalker.

As Quentin Tarantino did in “Once Upon A Time…In Hollywood,” Anderson gets the details right about the clothes, the hair, the costumes, the set design (complete with floral wallpaper in the suburban homes), and a soundtrack filled with 1970s music. He also doesn’t let his actors wear a lot of makeup, letting us see the blemishes on their faces, better to showcase their raging hormones.

Where Tarantino’s characters hung out at Musso and Frank’s, Anderson’s spend time at Tail o’ the Cock, another real-life place (on Ventura Boulevard in Sherman Oaks) with red banquettes, steak dinners, and plenty of cocktails. Gary’s welcome there because the restaurant is a client of his mother’s, a publicist. But there’s no appearance of Licorice Pizza, an infamous record store of that era whose title came from slang for 12″ vinyl albums resembling black pizzas.

Like George Lucas’ seminal “American Graffiti,” “Licorice Pizza” plays out across a series of vignettes, although these take place over several years, not a single night. In fact, like that classic, “Licorice Pizza” begins with a cherry bomb being thrown into the toilet of a crowded boys’ room at a high school. It also features one of the funniest sequences I’ve seen regarding the gas shortages of that era.

Anderson, who both wrote and directed, is a clever storyteller with a gifted eye and ear for dialogue. He’s also very good at casting, with a positive bias towards people he’s close to and/or worked with before.

In a stunning big-screen debut, Alana is played by Alana Haim who, with sisters Este and Danielle, make up the rock trio Haim, for whom Anderson has directed several music videos. She gives a natural, entirely refreshing performance. As for Gary, he’s played by Cooper Hoffman — another first-time movie actor whose father, Philip Seymour Hoffman, was an Anderson regular — with the same hairdo his father had in Anderson’s “Boogie Nights.”

The rest of the cast includes Alana Haim’s real-life sisters and parents as her onscreen family. Bradley Cooper steals every scene he’s in as hairdresser-turned-producer Jon Peters with testosterone oozing out of every pore. Sean Penn plays William Holden, with Tom Waits as a Sam Peckinpaugh type. Christine Ebersole is a character based on Lucille Ball, complete with a musical number from a movie awfully similar to “Yours, Mine, and Ours.” Anderson’s longtime girlfriend, Maya Rudolph, has a small part. Harriet Sansom Harris plays a talent agent with an eye for Gary. John Michael Higgins plays a Japanese restaurant owner despite not speaking the language. And don’t blink or you’ll miss another Anderson regular, John C. Reilly, in Herman Munster makeup.

There’s even a small role for LA radio personality Tim Conway Jr., whose father (best known for his years on “The Carol Burnett Show”) started out in Cleveland, where he was once half of a comedy duo with Paul Thomas Anderson’s father, Ernie. Yes, that’s the same Ernie Anderson who went on to become the voice of ABC-TV’s promos for decades (“The Loooove Boat”). But in the 1960s, Ernie spent years on a local TV station in Cleveland as Ghoulardi, host of a horror movie series. That’s why Paul Thomas Anderson’s production company, which gets credit at the top of “Licorice Pizza,” is Ghoulardi Films.

There’s so much fun stuff going on in “Licorice Pizza” I give it a 10 out of 10, which means it will be at the top my Best Movies Of 2021 list. It will also be remembered as the launching pad for Alana Haim’s movie career. I can’t wait to see it again once it gets to a streaming service, but for now it’s going to have a theaters-only run, beginning tomorrow.