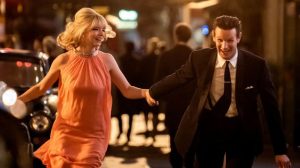 Edgar Wright’s “Last Night In Soho” consists of three overlapping elements: the present, the past, and the soundtrack.

In the present, Ellie (Thomasin McKenzie) is a naive young woman from Cornwall who gets accepted to a fashion college in London, where she hopes to become a dress designer. But on her first day in the dorm, her roommate turns out to be a snotty mean girl named Jocasta (Synnøve Karlsen), whose disdainful attitude and snide remarks drive Ellie to look for someplace else to live. She finds a room on the top floor of a home owned by Miss Collins (the late Diana Rigg), the kind of old lady landlord who became a movie cliche a long time ago.

At night, when Ellie gets into bed, she’s visited by dreams of London in all its Swinging Sixties glory, focused on a babydoll-dress-wearing blonde named Sandie (Anya Taylor-Joy), who seems to be living a life of nightclubs, attractive men, and partying. Wright does some nice camera trickery to show Ellie and Sandie as each other’s reflections in mirrors and windows, the better to merge the two women into a single storyline. Ellie loves the timeframe Sandie lives in, to the point where she plays old vinyl records from that decade and pictures herself wearing era-appropriate garb.

But things start going south when Sandie’s life devolves from happy free spirit to a woman exploited by the men around her. After Taylor-Joy does an a cappella version of Petula Clarks “Downtown” as an audition, the club owner says to the man who’s decided to manage her, “Okay, she can sing, but what else will she do?” As Ellie’s dreams turn more realistic — and occur even when she’s awake — she gets sucked into Sandie’s life as if she’s experiencing her pain from the past in the present day.

That’s where “Last Night In Soho” lost me, as it turned into a gruesome horror story. What seemed like a fascinating dual-period piece becomes nothing more than a by-the-book nightmare tale designed to scare, but without any interest in fleshing out the lead characters. They merely exist as overwhelmed targets of a series of faceless men. Wright further muddies the water with an odd old man played by Terence Stamp, a love story that never goes beyond the superficial, and Ellie’s visions of her dead mother. It’s all too much.

The best thing “Last Night In Soho” has going for it is the music. As he did in “Baby Driver,” Wright knows how to put together one hell of a mixtape to go with the action. The soundtrack includes a dozen deep-cut 1960s songs like “A World Without Love” by Peter and Gordon, “Wishin’ and Hopin'” by Dusty Springfield, “Starstruck” by The Kinks, “I’ve Got My Mind Set On You” by James Ray (later remade by George Harrison), and the original “There’s Always Something There to Remind Me” by Sandie Shaw.

Since I enjoyed about half of “Last Night In Soho,” I’m giving it a 5 out of 10. Opens tomorrow in theaters.