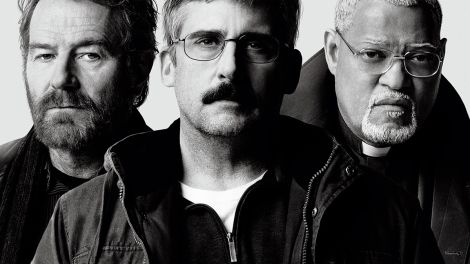 It’s 2003 when we meet Bryan Cranston, who owns a rundown bar in Norfolk, Virginia. Steve Carell shows up as an old friend from the Vietnam War with a sad request. Having lost his wife to cancer earlier in the year, he was devastated when he learned his son had been killed in action in Iraq. Although they haven’t seen each other in a long time, Carrell wants Cranston and another former Marine buddy, Laurence Fishburne, to provide moral support while he buries his son.

The three men couldn’t be more different. Cranston is a loud anti-authoritarian, Fishburne gave up his wild past to become a minister, and Carrell — in a beautifully subtle performance — is a quiet man beaten down by life. We also discover that something happened during their stint in Vietnam that ended with Carrell doing some time in the brig, while the others didn’t. Still, they have a bond across the decades, and Carrell needs that closeness to help him get through this low point.

Their adventure takes them to Dover Air Force base, where they retrieve the young soldier’s casket, and then on a road trip to have him buried in his hometown in New England. Along the way, the three veterans are assigned a young marine (who served with Carrell’s son) as an official escort, and to share stories from a different war.

The exploits of this group of veterans is reminiscent of “The Last Detail,” a 1973 film starring Jack Nicholson, Randy Quaid and Otis Young. That’s because both movies were based on books by Darryl Ponicsan, who co-wrote the screenplay for “Last Flag Flying” with director Richard Linklater, who knows when to slow down the action to allow us to simply listen to his characters. That’s particularly true in a scene where the three veterans go to visit Cicely Tyson as the mother of a man who may have died because of them in Vietnam. Thankfully, Linklater doesn’t burden us with flashbacks to that war, purposely leaving their problems from the past somewhat vague.

Although Cranston is a little over-the-top in some scenes, the performances are all very good as the friends bond all over again and the story sways from tragedy to dark comedy. Fishburne plays his character with stoicism, although he lightens up as the escapade unrolls. But it is Carrell, playing a quiet, grieving man, who really got my attention and continues to impress me with his range.