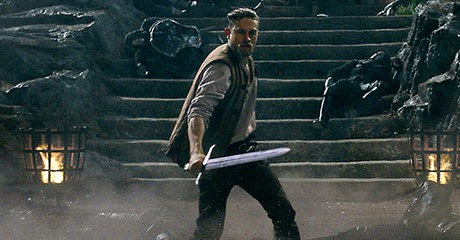 I don’t know what the hell is going on. That’s what I kept saying while watching “King Arthur: Legend Of The Sword.”

From the very first scene, where CGI monsters attack a castle and hundreds of stunt people fall dead all over the place, I had no idea what was happening. Having not read any of the King Arthur folklore, I don’t know about the mystical powers of his sword, or who those monsters were, or why there are eel-women swimming in the water under the castle — and the movie doesn’t bother explaining anything. It just goes ahead with an impossible-to-follow plot involving Charlie Hunnam growing up to take on his evil uncle Jude Law.

Along the way, there are flashbacks that reveal very little, and even a few flashbacks that take place at the same time as the current action. It’s all incredibly confusing and also quite dark — I don’t mean comedically, I mean in terms of lighting. Director Guy Ritchie (who has never made a movie I liked, including the abominable “Man From Uncle” a couple of years ago) makes things worse by editing the hell out of the proceedings, so even in the fight scenes, you never really see what’s going on. I swear I counted 100 cuts in one minute, which made the result unintelligible.

I didn’t care for any of the characters, wasn’t quite sure who some of them were and what their motivation was, and don’t even get me started on the giant snake that appears out of nowhere. Halfway through, I considered leaving the theater to go home and watch a great movie about King Arthur, “Monty Python and the Holy Grail.” But I stayed to the end, and I’m sorry I did.

The only person who might be happy with this dreck is Robert DeNiro, because it might beat out his horrible movie, “The Comedian,” for my worst movie of 2017.