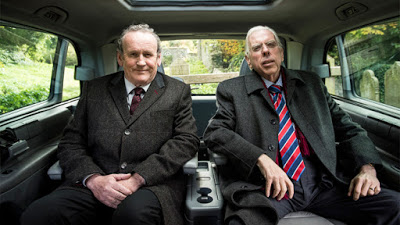 “The Journey” is yet another movie based on a real event that most Americans know nothing about, including me. It takes place in 2006, when the conflict in Northern Ireland had been going on for decades between Catholics and Protestants. That year, top representatives of both sides sat down to try to negotiate the peace, led by two men who couldn’t have been more different.

Ian Paisley was the ultra-religious and conservative leader of the British side. The other was Martin McGuinness, a former Irish Republican Army leader who wanted the two Irelands to reunify. During the negotiations in neutral Scotland, much progress was made, but they still hadn’t gotten to the finish line. Then Paisley announced that he had to leave the gathering to go home and celebrate his 50th wedding anniversary with his wife. McGuinness agreed, under one condition — he had to travel with Paisley, because neither side could be seen to have given in to any accommodation that wasn’t available to the other side. Begrudgingly, Paisley agreed, and the two of them sat in the back of a car, at first simply glaring at each other but, along the way, out of the sight of their colleagues and the world, they started talking.

Paisley and McGuinness are played by Timothy Spall (“Denial,” “Harry Potter and the Goblet of Fire”) and Colm Meaney (“The Van,” “Under Seige,” “Star Trek: Deep Space Nine”), respectively. They’re both perfect for their roles, but unfortunately the filmmakers weren’t content to just put them in a moving vehicle and let them talk things out.

Instead, writer Colin Bateman and director Nick Hamm use the cinematic device of over-explanation via John Hurt’s character, Harry Patterson. He’s the one who has outfitted the vehicle with audio and video that is fed back to a room at the negotiation site where he and others can watch and hear what’s going on. He also can talk to the guy behind the wheel, who is not only charged with driving the two important men, but also trying to stimulate conversation between them. Hurt’s character repeatedly provides unnecessary exposition in his instructions to the driver, and all the scenes of Patterson, Prime Minister Tony Blair, Sinn Fein leader Gerry Adams, and others are a distraction from what’s going on with the two main characters of “The Journey.”

That’s a shame because Spall and Meaney are eminently watchable and compelling. This could have been the dramatic equivalent of the Steve Coogan/Rob Brydon “The Trip” series (btw, the third of those movies, in which they travel through Spain, comes out next month), albeit without Michael Caine impressions. Instead, it’s a ride with too many detours.