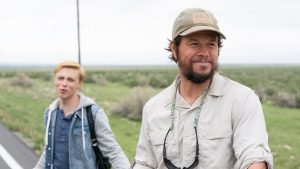 “Joe Bell” is based on the true story of a father (Mark Wahlberg) who quit his job and began a walk across America in 2013 to raise awareness of bullying. He undertook the mission after his 15-year-old son, Jadin (Reid Miller), committed suicide because of the abuse he suffered at the hands of fellow high school students in a small Oregon town.

While Wahlberg is the movie’s star and garners most of the screen time, the breakout performance is by Miller, who portrays Jadin as a boy tormented by his peers, yet unable to get his father to understand the pain he’s dealing with. The story would have been so much more interesting if it had focused on Jadin’s plight, rather than Joe’s conflicted response to it.

Worse, “Joe Bell” is a message movie that doesn’t allow its central character to communicate the no-bullying lesson very well. Wahlberg is seen giving very short talks to small groups and student assemblies, but Joe is not a good public speaker, so all he offers are lines like, “Love your children no matter who they are” and “Bullying is bad, so don’t do it.” At no point does Joe challenge homophobes spewing hate speech, nor inject himself as an eloquent spokesperson for the LGBT cause.

There’s one scene towards the end of the movie where Joe is invited to address several hundred students in a high school gymnasium, yet all we hear him say is, “Um, thank you for having me here today.” I have a feeling that the screenplay by Diana Ossana and Larry McMurtry (who co-wrote “Brokeback Mountain”) included some grand statement about tolerance and inclusivity that Joe developed during his months-long walk across the US, but it must have been cut by director Reinaldo Marcus Green. It seems unlikely he would have hired hundred of extras to fill those bleachers for a scene that only lasts ten seconds.

In the last decade, Wahlberg has specialized in movies based on true stories (e.g. “Lone Survivor,” “Patriots Day,” “Deepwater Horizon”), but none of them has been very good. Now, we can add “Joe Bell” to that disappointing list. Even the presence of Connie Britton — who is genetically incapable of a bad performance, but not as talented when it comes to picking projects to appear in — as Joe’s wife and Jadin’s mother can’t save this unfulfilling movie.

“Joe Bell” has no chance of success in a theaters-only release. The only positive things it could lead to are bigger and better roles for Miller, a talent worth keeping an eye on.