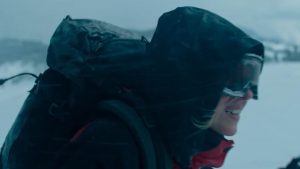 As the based-on-a-true-story “Infinite Storm” opens, Pam Bales is preparing for another climb up New Hampshire’s Mount Washington — known for having the worst weather in the world at its peak, with blinding snow and winds gusting up to 200mph. But Pam is ready for it. She’s an experienced climber and a member of the local search and rescue team.

When she stops by the local cafe to fill two thermoses with coffee, the restaurant owner warns Pam about an incoming storm that could make the ascent treacherous. Pam, being a level-headed woman, decides to call off her hike and heads home to climb back into bed as the credits roll.

Pam drives to the trailhead, where she says hello to a couple who have just come down the mountain and asks if they know who owns the only other car in the parking lot. They don’t, so Pam makes a mental note to keep her eye out for whoever that might be. As disciplined climbers do, she tucks a printed map of her ascent under her vehicle’s windshield wiper, in case someone has to come looking for her later.

All of this is mere prelude. As Pam climbs higher (without a lot of dialogue other than grunts of effort), the skies turn grayer, the wind picks up considerably, and snow starts falling. She keeps going as long as she can, but eventually it’s too much for even an accomplished hiker like Pam, so she turns back before she reaches the peak.

That’s when she spots footprints in the snow which look more like they were made by sneakers than hiking boots. Looking around, she sees a guy (Billy Howle) sitting on the edge of a cliff, wearing a t-shirt and a pair of shorts, freezing to death. Pam’s rescuer skills kick in, and she’s determined to get him down the mountain before nightfall. He doesn’t want to go, and won’t tell her why he’s there or what his name is, so she starts calling him John as she warms him up and pushes, pulls, and cajoles him down the hillside.

“Infinite Storm” is essentially a showcase for the very talented Naomi Watts to fight the elements — not the first time she’s portrayed a woman taking on extreme weather. In 2012, she starred in “The Impossible,” about a family whose vacation was torn apart by the massive Indian Ocean tsunami. Watts was terrific as the mother, earning nominations for an Oscar and several more awards. In the decade since, she’s kept busy as part of the “Divergent” franchise, co-starring with Michael Keaton in “Birdman,” and playing Gretchen Carlson in “The Loudest Voice,” among other roles.

Director Małgorzata Szumowska did an excellent job of making me feel those icy blasts of wind and slicing sideways snowflakes. They shot “Infinite Storm” in Slovenia on the southeast edge of the Alps, where moviemaking is a lot less expensive than the White Mountains of New Hampshire. But I can’t imagine the budget was all that large to begin with, since it has only a few cast members — the snowmaking machines probably cost more than the humans. Besides, if you’re going to make a movie in the midst of a pandemic (shooting took place a year ago), you might as well do it outdoors with a minimum of personnel.

“Infinite Storm” is a movie you don’t have to think much about. You just let it play out while you root for Pam to make it to the bottom with John. Unfortunately, Joshua Rollins’ script has a tacked-on ending that’s not fully satisfactory (or true), and tries to impart some messages about perseverance, loss, and grief, but doesn’t quite get there.