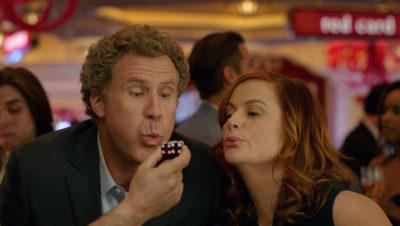 I didn’t have high hopes for the Will Ferrell-Amy Poehler comedy “The House,” but I didn’t expect that it would come in so far below my already-low expectations. I’m going to start by telling you to stay away from this piece of dreck, which has a lot of balls calling itself a comedy, considering it made me laugh zero times. But I’ll lay out the plot for you.

After a big scholarship they were expecting is pulled, Poehler and Ferrell don’t have enough money to send their daughter to college. Apparently, in their 18 years of upper-middle-class suburban parenthood, they didn’t think to save enough to pay for their kids education. They can’t borrow money from the bank, or get a raise at work, or think of any other way to make their finances work. Move into a smaller house, maybe? Tell their daughter to go to a cheaper school or community college? That’s crazy talk!

Instead, they take advice from their loser friend (Jason Mantzoukas) and open up an illegal casino in his house. That could have made an interesting premise for a well-thought-out comedy, but this is anything but. Every plot point and non-shocking twist is unsurprising and ridiculous. Don’t even ask where they get the money to finance this operation in the first place. No one acts like any real person would in any similar situation. The entire cast overacts every scene. The subplots don’t matter one bit. The soundtrack includes “The Sopranos” theme, fer chrissake.

It’s as if, in real life, writer/director Andrew Jay Cohen needed money to send his own daughter to college, but instead of making a good movie, he decided to just throw a bunch of crap into a room and turn the camera on, in the hopes the bucks would start rolling in. I don’t think that’s going to happen — and the studio probably knows it, because they didn’t have a single press screening. At the Thursday night show I attended, there were exactly ten people in the audience. It has a Rotten Tomatoes score of 15%. With a budget of over $40 million, I’d be surprised if “The House” makes its money back, or even does more than $12 million this weekend. If it does, that would be the only thing about the movie that surprised me.