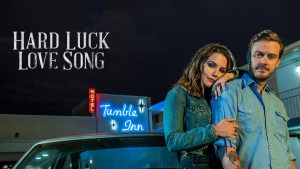 Jesse (Michael Dorman, the lawyer/brother in “The Invisible Man”) is a down-on-his-luck singer/songwriter who hustles pool to make a few bucks as he moves town to town. Once he gets to a new locale, he scopes out the pool rooms, then goes to work — purposely losing a few games to his marks, then knocking the balls down once the wagers have gotten big enough.

It’s the kind of act that can get a guy in trouble with the wrong opponent, and that’s just what Jesse runs into when he enters a tournament. The other players are straight out of central casting rough-looking biker types, none of whom you’d want to casually bump into, let alone embarrass in front of their peers. When Jesse gets to the final heads-up best-of-three match, he faces Rollo (Dermot Mulroney with a gold-teeth sneer), another hustler whose entourage includes some guys who make the biker types look like boy scouts. Rollo and Jesse exchange some words, which leads to a side bet between them and, when the latter starts pulling away towards a win, the former advises him, “You’re never leaving here with the money.” Yes, the script — writer/director Justin Corsbie’s feature debut — is just that obvious, as is Jesse’s escape through the pool room’s kitchen and back alley.

I have to pause here to talk about the pool room scenes, which pale in comparison to the two great movies centered on that game. Those would be “The Hustler” and its sequel, “The Color Of Money.” Rather, “Hard Luck Love Song” is more akin to “Pool Hall Junkies,” a 2002 title on my Movies You Might Not Know list starring Mars Callahan, who not only wrote and directed it, but managed to put together quite a supporting cast, including Rod Steiger, Christopher Walken, Chazz Palminteri, and Rich Schroeder. In both “Love Song” and “Junkies,” the action at the pool table is very realistic and well-shot, but as I wrote in my review of the latter, “the non-pool-related dialogue is often trite, and the plot devices that get us to the climactic game offer little suspense.”

Once Jesse gets back to his motel room with the prize money, he leafs through the local weekly paper, the kind that has ads in the back for women who offer certain services. One of them catches his eye and he warily calls the phone number. When a voice answers at the other end, it’s not some anonymous sex worker, but a woman he clearly knows and has history with.

Carla (Sophia Bush, from TV’s “One Tree Hill”) agrees to come to Jesse’s room, where they drink a lot, snort some coke, listen to music, and catch up. She gets him to play a tune on his guitar and they dance together, but the action never makes it to the bed. At some point, something sparks a big disagreement over whatever turned their relationship sour years ago in New Orleans. Things get ugly in the room and Jesse throws Carla out. But, of course, they don’t stay apart very long.

Once they’ve patched things up, they head for the bar where Carla works as a bartender to have even more drinks and hang out with her friends and coworkers. One of them is Skip (Eric Roberts), a sort of fatherly figure in Carla’s life — a character completely underwritten and irrelevant to the plot whose presence only helps delay the inevitable.

As anyone who’s ever seen one of these movies could have easily foreseen, things turn ugly again when Jesse and Carla leave the bar and are attacked by Rollo and his goons. They give Jesse a helluva beating, including multiple kicks to the ribcage once he’s knocked down, followed by a literal whipping with a belt. It’s the sort of assault only movie characters recover from quickly. Thus, after a newly-introduced third party intervenes and beats up the attackers, Jesse’s right back on his feet, and Carla’s ready to re-start their longtime off-and-on romance.

I can’t recommend “Hard Luck Love Song” because of its paper-thin characters and predictable plot. And don’t even get me started on the cop who shows up to, I guess, offer some comic relief.