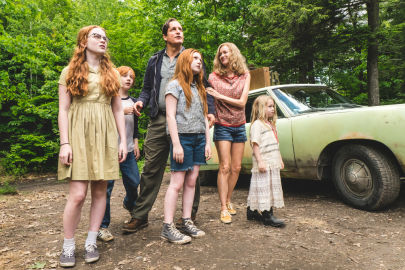 “The Glass Castle” is based on Jeanette Walls’ best-selling memoir of growing up with a drunken, eccentric, abusive father who cared more about his own dreams than providing food and shelter for his children.

Dad is played by Woody Harrelson, sounding as if he has a chaw of tobacco stuck in his mouth the whole time. It’s a powerful performance, but I hate the way the movie at times makes him seem likable — he was a monster. Brie Larson plays Jeanette as an adult, writing a gossip column for New York magazine while remembering scenes from her childhood as she’s preparing to marry her boyfriend. Naomi Watts plays her mother, who would rather sit and paint than get up and cook something for her kids, which leads to a horrible opening scene in which 4-year-old Jeanette is forced to make her own hot dogs and catches on fire. These two are models of irresponsible parenting — they don’t send the kids to school, they don’t feed them for days on end, and they don’t get them real housing, opting instead to squat in abandoned homes as they move around the country with their belongings tied to the top of the car. You won’t make up for that with scenes of Dad laying out in the desert and talking to Jeanette about the stars.

The performances are all fine, especially Ella Anderson, who plays Jeanette as a child who is torn between her love for her father and the tortuous life she’s forced to lead. But I absolutely hated the ending — and the credits, which show pictures of the Walls as a loving family who just had a few wacky adventures together. No, this is a depressing tale of children done wrong by their parents.

If you want to see a much better movie about an eccentric father raising his children without abusing both them and alcohol, go rent “Captain Fantastic,” which I named one of the Best Movies Of 2016 (read my review here). “The Glass Castle” won’t be on this year’s list. I give it a 5 out of 10.