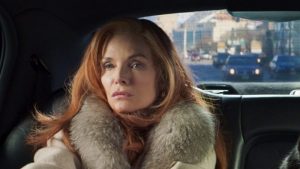 I was really looking forward to seeing “French Exit,” because after it played some film festivals last year (before the world locked down), it drew rave reviews for its leading lady, Michelle Pfeiffer, whose work I’ve always liked.

What a disappointment! Not so much for Pfeiffer, who does a fine job as Frances, an upperclass New York socialite widow who’s shocked to discover — despite seven years of warning from her accountant — that her money has run out. When asked why she didn’t plan better, she replies, “I thought I’d be dead by now.”

Desperate to have something to live on, she sells her possessions and raises what appears to be about a hundred thousand dollars. But she has no place to live with her grown son, Malcolm (Lucas Hedges), until a close friend says the duo can stay in her fully furnished apartment in Paris. So, they pack up their stuff and cross the Atlantic on a luxury cruise ship. On the voyage, Malcolm encounters a psychic named Madeleine (Danielle Macdonald). Her talents come in handy once everyone’s arrived in Paris when Frances wants Madeleine to do a seance so she can talk to her dead husband, who she believes has been reincarnated in her cat. Sure enough, at that gathering, we hear the voice of the dearly departed Frank (Tracy Letts), who doesn’t have anything compelling to say.

This is all played as if it’s witty satire, but I didn’t smile once while slogging through the 110 minutes of “French Exit.” I didn’t care at all about Frances, whose arrogance and impertinence are never funny. I hated the way she treated her remaining money as something to be given away to strangers. To do so, she over-tips waiters (€100 for a cup of coffee at a cafe), spends €2,000 at a grocery store (including a €500 bottle of wine), and gives large sums to homeless guys in a park, but nothing to her own son.

Malcolm, meanwhile, is a limp rag of a character who offers exactly nothing interesting as he follows mommy to France rather than staying in New York with his fiancée (who eventually shows up in Paris, too, with her new fiancée). For Hedges, by the way, “French Exit” is the second of two really bad movies released this year which were filmed at least partially on a boat crossing the Atlantic. The other was Steven Soderbergh’s “Let Them All Talk,” which I reviewed here.