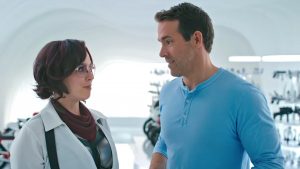 In “Free Guy,” Ryan Reynolds plays a character in a video game called Free City. Technically, he’s an NPC, a non-player character, because unlike the main figures in the game, Guy is nothing more than an extra, a bank teller who does little more than remain in the background. Free City is a “Grand Theft Auto” kind of chaotic video game, where the bank gets robbed several times a day, there’s constant gunfire on the streets, and helicopters keep falling from the sky in fiery crashes. Actually, it seems like almost everything in the game either catches fire or blows up.

Every day, Guy puts on the same blue shirt and khakis, gets coffee from the same barista, and walks to work with his best friend, Buddy, a guard at the bank. But one day, amidst the mayhem, Guy spots an attractive woman, Molotov Girl, who he’s never seen before, and follows her. Along the way, he grows aware that there’s something more to the environment he and those around him inhabit. Soon, he’s become the hero of the game.

Because none of his actions were part of the original code for Free City, its developers try to get Guy out of there by entering the game themselves. But Guy has learned some of the tricks of the game — including how to get weapons and make huge leaps with the aid of special sneakers — which he uses to stay one step ahead of his pursuers. All of this is possible because Antoine, the guy who runs the company that distributes Free City, stole some artificial intelligence elements from two programmers, Millie and Keys. The former is suing Antoine, but needs some evidence she’s convinced is hidden in the game. That’s why she’s entered Free City as Molotov Girl, who begins a relationship with Guy, who’s eager to help her.

Everything I just typed in the preceding paragraph may seem confusing, and since I would never be confused with a gamer, I may be using the wrong lingo, but it doesn’t matter. Like anyone playing Free City, once it starts, you just go along for the ride as the movie combines elements of “Groundhog Day,” “The Truman Show,” and “Inception.”

“Free Guy” is a rollicking entertainment full of amazing special effects and stunt work, with a very funny screenplay by Matt Lieberman and Zak Penn. Best of all, Ryan Reynolds is at his coolest as Guy, with an effervescent everyman quality that has us (and the game’s players) rooting for him the whole way. Jodie Comer, who made such a splash as Villanelle on “Killing Eve,” makes the most of her big screen break, bringing a nice warmth and intelligence to Millie/Molotov Girl. This won’t be the last time we see her in a major movie, I’m sure.

There are plenty of cameos that I won’t spoil — including what I’m told are fairly famous Twitch gamers whose names I wouldn’t know. Director Shawn Levy (who has helmed the “Night At The Museum” movies, “Date Night,” “The Pink Panther” remake, and several episodes of “Stranger Things”) has a really nice touch, balancing the visual and practical effects while getting good performances out of everyone in his cast.

Like Guy, I have some knowledge of what it’s like to be a background character in a Ryan Reynolds project. In 2015, I appeared as a featured extra opposite Ben Mendelsohn in one scene of the movie “Mississippi Grind,” which also co-starred Reynolds and Sienna Miller. Granted, I had a bit more to do than Guy did in his original form, but still. I wrote about that experience here.

“Free Guy” was originally scheduled to be released in July, 2020, but was postponed three times because of COVID. Holding it until now, when it can be seen in theaters, turns out to be a good idea, because this is not a movie you want to watch on your phone or TV. All of the special effects need a large screen to be enjoyed.

I got a big kick out of it, and the audience I saw it with did, too. If it draws a decent crowd on its opening weekend, word of mouth might keep this one around for a while.

In fact, I’ll start the recommendations with this: I’m giving “Free Guy” an 8 out of 10. Opens in theaters today.