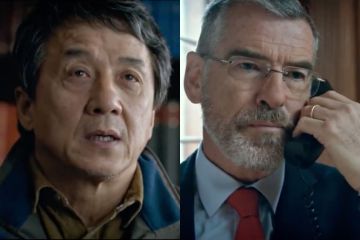 I went to a movie theater the other night and saw two movies with the same title, “The Foreigner.” One of them is a Jackie Chan revenge movie, as he tries to find the men who planted a bomb that killed his innocent teenage daughter while she was shopping for a prom dress. The other movie called “The Foreigner” stars Pierce Brosnan as a former IRA member who is now an Irish Deputy Minister, trying to unravel a mystery about a group of killers who call themselves “The Authentic IRA.”

Each of these plots would probably have made a pretty good movie on their own. The problem is that they’re mashed together into one confusing story that might have Chan listed first above the title — because that will help “The Foreigner” do huge box office in China, where much of the movie’s financing came from because he’s still that nation’s #1 movie star — but doesn’t give him much to do. He has a few exciting action sequences that prove he can still fight and move at age 63, but I’d bet that he’s now using a double for a lot of the shots rather than doing all his own stunts, as he used to. Aside from those few scenes, Chan doesn’t have much more to do than sit there and look morose, the way a lot of fathers would after losing their young daughter, or use his special skills to track down his prey. If you go expecting lots of action and amazing stunts with Chan taking on Brosnan, you may leave the theater underwhelmed.

As for the second-billed Brosnan, he projects power without lifting a single fist, commanding every scene he’s in. With an Irish accent dripping from his lips, he plays the Deputy Minister as a true politician — saying whatever it takes to get information and reaction from everyone he talks to. We’re not quite sure what his motives are, but they’re clearly not as innocent as he wants us to believe from the get-go. While Chan works his end of the plot mostly alone, Brosnan is constantly surrounded by stereotypical characters straddling the good guy/bad guy line.

Director Martin Campbell is an action-movie pro, having worked with Brosnan on the 1995 Bond movie, “Goldeneye,” as well as his successor Daniel Craig a decade later on “Casino Royale.” So is writer David Marconi, who worked on “Live Free Or Die Hard” and “Enemy Of The State.”

I just wish that they’d split “The Foreigner” into two tales told separately by opening up the Brosnan story in one and letting Jackie Chan do more of his thing in the other. The mash-up we get instead is okay, but not as good as it could have been.