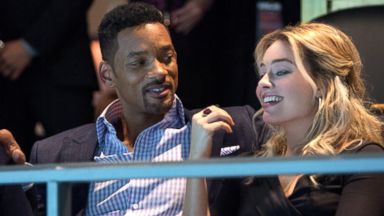 I’m a sucker for con artists. Not in real life, but at the movies. Give me a charismatic con man and a good grift, and I’ll fall for it all the way to the end, but it had better pay off along the way.

The newest entry on the con-man movie roster is “Focus,” with Will Smith as a smooth operator with a quick line, a light touch, and enough years in the business to know when to go and when to stop. But he has a weakness, and in this case it’s a young pickpocket wannabe played by Margot Robbie, who you may have seen as Leonardo DiCaprio’s wife in “The Wolf Of Wall Street.”

It’s clear that Glenn Ficarra and John Requa, who co-wrote and co-directed “Focus,” saw the 1973 movie “Harry In Your Pocket,” with James Coburn, Walter Pidgeon, Trish Van DeVere, and Michael Sarrazin. I added it to my Movies You Might Not Know list five years ago because I liked its story of a veteran pickpocket taking on a couple of rookies and teaching them the trade — and showing us how it’s done, too.

For “Focus,” Ficarra and Requa also enlisted the technical assistance of Apollo Robbins, who does pickpocket routines onstage, and there’s one sequence where Smith shows Robbie some things she should know while relieving her of a ring, purse, and phone, among other things — it’s a clever combination of Robbins’ roving hands and the basics of “Harry In Your Pocket.”

That’s followed by an extended sequence in New Orleans with Smith and his crew ripping off everyone in sight. It’s exciting and perfectly-timed, but more than a bit worrisome — I found myself wondering if I should be rooting for them as they pull off petty thefts from regular people, rather than greedy marks who should have known better.

From there, the movie moves on to a couple of longer con sequences which I won’t give away except to say that BD Wong is terrific as the mark in one of them.

In movies like this, it’s important that the audience not know too much, so you can’t assume you have all the information at any time. One fault I had with “Focus” was the directors’ unnecessary insistence on going back to show us how a certain move or ripoff was set up. It’s fine to fool us and then move on — you don’t have to point out the parts of the con that we didn’t see — and the more complex the twists, the better.

“Focus” works entirely because Smith has the charisma, Robbie has the body, and the plot has the cleverness to make it worth your while. But watch your wallet on the way out. One thing you’ll learn from “Focus” is how much more secure you have to keep your personal items whenever you’re in a crowd.