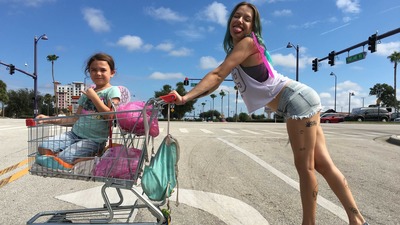 They don’t have anywhere to go;
Wandering around from door to door.

Those lyrics describe the kids at the heart of the “The Florida Project.” Unlike in the song, the mothers in the movie aren’t dead, but their children still wander from door to door, looking for something to do and someplace to play.

It’s the summer in Orlando, and the scene is the Magic Kingdom motel, one of those places most tourists barely notice on the roads into Disneyworld (“The Florida Project” was the name Walt Disney used in the 1960s while buying up 27,000+ acres of land through dummy corporations and setting up the plans for what would become that theme park). Many of the motel’s residents are lower-class people trying to scrape by day to day without much money. Because it’s summer, the kids don’t go to school, so they make their own fun.

One of the children is six-year-old Moonee, whose mother Halley is single and broke. Halley used to be a stripper, but now is unemployed, and the only way she can make a few bucks is to hustle perfume she buys wholesale and then sells at a markup to people in the parking lot of a nearby condo complex. Halley isn’t much more than a kid herself, no older than 25, and it’s clear her life has been full of bad choices — getting pregnant as a teen, covering herself with tattoos, smoking non-stop, and letting her daughter do pretty much whatever she wants.

As for Moonee, we first see her with her best friend Scooty, son of another single mom who works at a local restaurant, as they run to another motel down the street, where they climb up onto the second floor to spit on the cars below. When the woman who owns that car comes out and finds them, she makes them clean up their mess as they make friends with her granddaughter, Jancey. Pretty soon, the three young kids are roving as a mischievous pack, looking for adventure and often causing trouble.

The only real adult in their world is the manager of the motel, played by Willem Dafoe in a very good performance. He’s protective of the kids even as he understands their restlessness. He also recognizes that the people who live in the motel are barely hanging on, and yet he makes them pay the rent on time, kicks out hookers using the rooms for tricks, and does his best to maintain the place amid the squalor. Dafoe plays him with just the right mix of compassion and frustration.

He’s the best thing in “The Florida Project,” along with newcomer Brooklynn Prince, who plays Moonee. I always wonder what went through the mind of a young actor’s parents when they allowed their child to play someone as foul-mouthed and rambunctious as Moonee is. Whatever that thought process was, it paid off, as Prince will get a lot of attention for her performance, which is perfect.

“The Florida Project” is being compared to last year’s Oscar winner, “Moonlight,” for showing us a portion of humanity whose stories rarely get told on screen. That’s true, but the main characters in this are so unlikable that I left the theater with a very bad taste in my mouth. I imagine it would be hell to live in that motel as neighbors of these kids and adults, and I didn’t enjoy spending time with them in a movie theater, either.