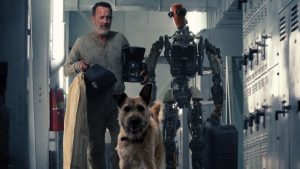 “Finch” is a mostly-lighthearted coming-of-age story during an apocalyptic road trip. The action takes place after Earth’s ozone layer has been depleted by a solar flare to the point where sunshine becomes deadly — destroying crops, raising average daily temperatures to 150 degrees, and flooding anyone and everything on the surface with massive UV radiation.

Wait, didn’t I say this is a lighthearted movie? Yes, because the story focuses exclusively on the title character, a robotics engineer played by Tom Hanks, who survives along with his dog, Goodyear, and a small little robot named Dewey (whose name I hope is a tip of the hat to the classic Bruce Dern sci-fi movie, “Silent Running”).

But that’s not all.

As the story begins, Finch is building another robot, this one with a head, arms, and legs. This one’s really smart because Finch has been feeding it the contents of encyclopedias and other books as he developed it. So, when the robot finally gets up and running (well, walking), it has a massive knowledge base. That’s when Finch and all of his sidekicks have to abandon their home base in St. Louis (yes, Finch even wears a Blues jersey) because of impending storms even more severe than the tornadoes and hail attacks that impact our midwestern lives several times each year. These are rolling meteorological events that could last 40 days (my, how biblical!) and wipe them out, so man, dog, and robots take off in an RV.

It is on that trip the coming-of-age story kicks in, with the robot as the subject (and the repeated source of physical comedy). As they travel west, Finch teaches the machine how to act like a human, the meaning of trust, and how to follow Isaac Asimov’s three laws of robotics, adding a fourth one: above all else, take care of the dog.

If you wanted to be a cynic, you could wonder how the robot learns so quickly to be fluent in English speech idioms, have emotional responses, and give the thumbs-up sign. But doing so would be like wondering how any of the other characters on “The Big Bang Theory” could stand to spend even five minutes in the same room as Sheldon Cooper. You’re better off not tugging at that thread.

On the other hand, it would be easy to see “Finch” as a sappy, sentimental movie about friendship, responsibility, and survival. Fortunately, Hanks helps it rise above that. We know (from “Turner and Hooch”) he can do dog-banter. We know (from “Castaway”) he can carry a movie as the only human for miles around. We know (from myriad other titles) he can play both gruff and warm, often in the same scene. Hanks gets to do all of that in “Finch.”

This movie must have been relatively easy to make during COVID since Hanks’ only human co-star is Caleb Landry Jones as the voice of the robot (not Dewey, who squeaks like an offspring of Wall-E and R2D2).

I could easily have fallen onto the cynical side of the fence on “Finch,” but I’m opting to lean just a little towards sentimental instead. Though there are a couple of tense sequences along the way, “Finch” is a movie you could watch with your kids, who will mostly just want to make sure the dog comes through it all in one piece (spoiler alert: he does).