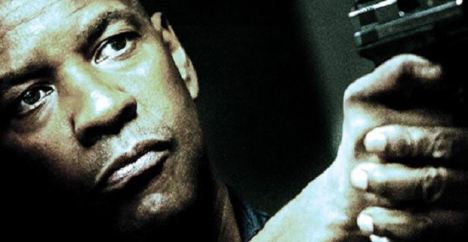 Movie quiz: You’re watching an action movie. The hero walks into a room, alone and unarmed, and encounters a half-dozen bad guys, all holding guns, knives, and other weapons. What happens? If you don’t know that, by the end of the scene, the bad guys will all be dead and the hero will walk away with nothing more than a flesh wound, then you know nothing about action movies.

In “The Equalizer,” Denzel Washington is the hero who dispatches bad guys in exactly that style. And if that’s not enough of a movie cliche for you, there’s even a scene where he blows something up, complete with a growing fireball, as he walks towards the camera in the foreground.

Don’t get me wrong. Denzel is one of our best actors, but this role and these scenes could easily have been played by Bruce Willis, Vin Diesel, or Liam Neeson (another 60-ish actor who has forsaken quality dramatic work for the big payday of stereotypical action hero stories).

The best action movies have great villains, and the Russian crime enforcer played by Martin Csokas in “The Equalizer” is certainly a good one. He’s evil, he has scary tattoos all over his torso, and he speaks quietly while creating fear and mayhem. The movie also includes a few minutes of Melissa Leo as Denzel’s former boss — it’s hard to argue with any performance of hers. And it’s directed by Antoine Fuqua, who did “Training Day” (which Denzel won an Oscar for) and loves to shoot extreme violence in slow-motion so much he does it again in “The Equalizer.”

Here’s a bit of trivia I didn’t know until Tom O’Keefe mentioned it the other day. When the TV version of “The Equalizer” (starring Edward Woodward) aired on CBS in the late 1980s, it was on Wednesday nights at the same time that NBC was airing “St. Elsewhere” — the show that gave Denzel his first career boost.

I’m sure there will be pressure on Denzel to do “The Equalizer 2.” The formula is already in place, the cliches are ready to roll again, and the audience apparently is there, since this one earned $35 million this weekend.

But Denzel is better than that. For proof, see “Flight,” “Inside Man,” and “The Hurricane.”